"Losing Earth," written by Nathaniel Rich, is also set to be the subject of an upcoming book. The magazine article covers the 10-year period from 1979 to 1989, a decade when "humanity settled the science of climate change and came surprisingly close to finding a solution" but ultimately failed to act due to various political forces. 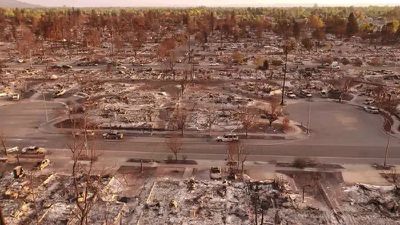 The "Losing Earth" article recounted how, from 1979 to 1989, a small group of American scientists, activists and politicians tried to save the world from the ravages of climate change before it was too late. The article was produced with the support of the Pulitzer Center and was based on more than 18 months of reporting and over 100 interviews.

"'Losing Earth' is an extremely important piece of journalism and we are thrilled it will get a wider audience," Jordan Cohen, a spokesman for The Times, said.

The New York Times said that at least a half-dozen bidders were aiming to acquire rights to the nonfiction project, which Apple plans to turn into a TV show.

The TV show will be produced by Anonymous Content, a company known for films that include "Spotlight," "The Revenant," "Collateral Beauty," and TV shows like "True Detective," "Mr. Robot," and "13 Reasons Why."

Rich will serve as an executive producer on the series alongside Steve Golin, founder of Anonymous Content.

"Losing Earth" is one of more than a dozen television shows Apple is working on, most of which are fiction-based. Apple plans to introduce the first of its television shows next year, perhaps as early as March, and several of them are in the casting stages. From The New York Times:

Apple has said it will start streaming its television offerings next year, when it will begin competing against Netflix, Amazon and Hulu in earnest.

The 30,000 word "Losing Earth" article can be read online on The New York Times website.

Tapiture
The fact that a discussion about climate change has to go into “politics, religion and social issues” is sad. It’s a fact, and now we’re starting to see the horrifying effects of it.
Score: 41 Votes (Like | Disagree)

The fact that a discussion about climate change has to go into “politics, religion and social issues” is sad. It’s a fact, and now we’re starting to see the horrifying effects of it.

A discussion about emoji has to go into PRSI. That's how stupid things have become.
Score: 15 Votes (Like | Disagree)

WestonHarvey1
Pointing to cold winters as evidence against climate change gets you ridiculed (rightfully), but for some reason pointing to any disaster at all and calling it evidence for climate change is always considered acceptable.
Score: 12 Votes (Like | Disagree)

lec0rsaire
This is such an important issue. We’re seeing permafrost in Northern Canada melt causing lots of erosion in Tuk. If the Siberian permafrost melts as well the amount of methane released will be worse than the CO2 we’ve all been concerned with. Something must be done before it’s too late for the future of humanity. While it was critically panned, Waterworld may yet turn out to be as prophetic as The Terminator.
Score: 11 Votes (Like | Disagree)

RickInHouston
New York Times has lost all credibility with their Liberal views. They fail to even report news if it doesn't meet their agenda.
Score: 11 Votes (Like | Disagree)

New York Times has lost all credibility with their Liberal views. They fail to even report news if it doesn't meet their agenda.

I know what you mean, versus infowars and Fox News and middle American facebook posts.

If you said something like Vox or Huff-BS-Blog-Post, I'd believe you, but contrary to what Trump and un/undereducated Middle Muricans think (assume), the NYT is a reputable news source.
Score: 11 Votes (Like | Disagree)
Read All Comments