Google this week debuted a new app called "Cameos," which lets celebrities record video answers to "the most asked questions on Google," and then post the recordings directly to Google's search results (via TechCrunch). The company says that this will let users "get answers directly" from the source when searching for facts and trivia about certain people in the spotlight. 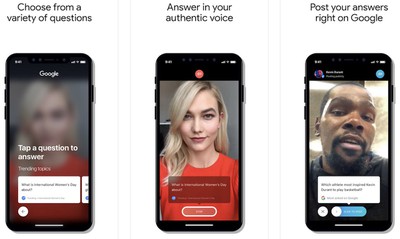 Although anyone can download the app [Direct Link], Cameos requires access to be granted once it's downloaded. Celebrities who gain access can browse the Internet's "top questions" asked about them, choose which ones they want to answer, and record a video of their response.

Cameos will push celebrities with new questions and searches to ensure that their Google-related content "stays recent and timely." With the app, high-profile users can respond directly to their fans' biggest questions and leave out any potential misinformation provided from other websites sourced from a Google search.

Once a question is answered, Google says that the response videos get posted "right to Google" so that users can see the videos when they search for the celebrity, or similar questions about the person. The videos will also appear on each celebrity's feed in the main Google app.

If I were a celebrity I would have some "fun" with this.

you're a celebrity to me macduke
Score: 12 Votes (Like | Disagree)

Google managed to make me to further dislike the company in a way that I never imagined.
Score: 6 Votes (Like | Disagree)

macduke
If I were a celebrity I would have some "fun" with this.
Score: 4 Votes (Like | Disagree)

you're a celebrity to me macduke

Hah. Am I a MacRumors celebrity? How exciting. I once used to write at 9to5Mac for a little while after starting my own Apple blog after getting advice from arn who owns this site. Wasn't able to keep up with it as I was nearing the end of college. I was also the cofounder of a student run television network when I was in high school (Comcast Channel 15 in Kansas City).

Now that my wife and I are done with moving and having babies I have considered starting a YouTube channel. It would be centered around doing tech reviews for photography, display tech, home automation, Apple products, and video games as well as talking about the philosophical implications of new technology and how it might impact our society. I'm interested in exploring the ways that technology can make meaningful improvements in people's lives and pointing out when technology adds unnecessary burden and should be avoided. I want to get into the details of why something is good design vs. bad design as I have a BFA in design and love it.

As of noon today the studio office construction that I've been working on in my basement for the past several months is finished and I would be able to move forward with doing this if I want to. I have a camera that can record 4K HDR and a nice Audio Technica microphone and I know how to edit video and cleanup audio so it's just a matter of me setting aside the time to do it. Do you guys think this is something I should pursue? I just worry about becoming lost in a sea of voices trying to start a new YouTube channel in 2018, but perhaps the community here could help support me getting off the ground with views and word of mouth?
Score: 4 Votes (Like | Disagree)

How is a 'celebrity' defined? Anyone who downloads the app that has anyone write a question about them?

Or is it Google's decision to only have certain Hollywood stars be celebrities on a case-by-case basis?