Juniper Research today published new data outlining predictions for mobile payments processing over the next five years, placing Apple Pay at the forefront in the market ahead of rivals like Samsung and Google. The study looked at Apple Pay, Samsung Pay, Google Pay, and other "OEM Pay" (official equipment manufacturer) wallets.

In total, OEM Pay users will reach 450 million globally by 2020, and the researchers predict that Apple Pay will account for 1 in 2 of these OEM Pay users at that time. This growth will cause OEM Pay wallets to reach $300 billion in transactions by 2020, representing 15 percent of total contactless in-store transactions within two years. 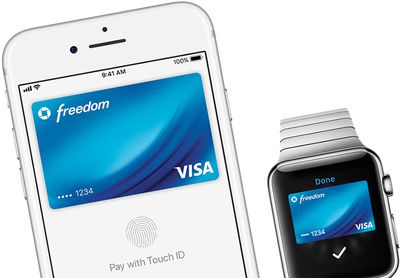 While Juniper Research included newcomers to the mobile payments market like Fitbit Pay and Huawei Pay, they admit that these will likely not grow much and mobile wallets will continue to see leaders in Apple, Samsung, and Google.

Research author Nitin Bhas explained: “We believe that growth over the next 5 years will continue to be dominated by offerings from the major OEM players. Additionally, we now have the likes of Huawei Pay and Fitbit Pay launching in several markets; this is now included in Juniper’s contactless forecasts”.

Although mobile wallets will continue to grow, the research shared today also looked at the overall market of contactless payments, which will still see dominance from contactless card payments made using physical credit and debit cards. In-store contactless payments will reach $2 trillion by 2020, making up 15 percent of the total point of sale transactions and driven by "strong adoption" in Europe and countries in the Asia Pacific region.

Sooner than 2020, contactless payments are already set to exceed the $1 trillion mark for the first time in 2018, one year earlier than Juniper Research previously predicted. These NFC-enabled credit cards began growing in popularity in recent years, arriving at a time when major credit card companies are aiming to simplify the checkout process for customers using both physical and digital cards.

In another Apple Pay-related research note shared earlier this year, Loup Ventures estimated that Apple Pay was being used on 16 percent of active iPhones worldwide. Looking to the future, Loup Ventures also predicted that Apple's mobile wallet will "gain widespread adoption" over the next three to five years, despite a slow few years of growth that began when Apple Pay launched in 2014.

keysofanxiety
I was extremely skeptical of Apple Pay when it first came out. I'm in the UK with contactless so I thought it was mainly to benefit US consumers where they had to sign cheques and do all these antiquated payment methods we'd got rid of decades ago.

Well one iPhone X 9 months later and I don't carry my wallet with me any more. There's something really great and secure about Apple Pay. It's nice to have everything in one place with digital receipts when you make payments. Also there's no payment limit like there are with debit cards, unless you decide to shop at Tesco and they have a 30 pound limit on all contactless payments.

Yeah, I'm definitely not surprised at this news. In fact I could definitely see it being much higher than 50% in a couple of years. Apple Pay slays.
Score: 11 Votes (Like | Disagree)

So that ‘50 cent vending machine fee’ swayed you from ever Considering Apple Pay again? Seems like you’re looking for a reason to dismiss Apple Pay altogether.
Score: 8 Votes (Like | Disagree)

donster28
Couldn't manage without Apple Pay nowadays. Many times I forgot my wallet at home and Apple Pay came to the rescue.

Funny how many cashiers still say "That's cool!" when I use my Apple Watch to pay. A real game changer!
Score: 8 Votes (Like | Disagree)

Which is even worse because Apple Watch has shorter battery life and worse reception than phones or it happens to separate. Compared to plastic card use that's unaffected by battery life or reception and is significantly more durable. I can live without my phone for communication but not without the ability to buy gas, food or get emergency cash. Critical things are better left simple and reliable.

Why do you keep mentioning reception? You don’t need any reception to use Apple Pay, it will work with the device in airplane mode.
Score: 7 Votes (Like | Disagree)

Apple Pay. I'd rather avoid fees as much as possible for anything.

How did the vending machine know you were using Apple Pay?

Correct me if I’m wrong but... as far as the contactless reader is concerned, Apple Pay appears to be just another contactless card.

Most readers can’t distinguish between a contactless card or a mobile with nfc.
Score: 7 Votes (Like | Disagree)
Read All Comments