Apple has shared three new Close Your Rings ads on its YouTube channel in Australia, highlighting the Activity app on Apple Watch. 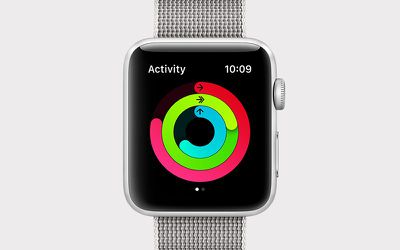 The fast-paced, 15-second videos each feature a different person — Eric, Atilla, and Yocelin — as they go about their busy days, closing their Move, Exercise, and Stand rings on the Apple Watch Series 3 in the process.


Apple has been using the slogan "Close Your Rings" as part of a fitness-oriented marketing campaign for the past few years, including a series of Apple Watch Series 2 ads last year and a dedicated page on its website.

Apple Watch users can close the Move ring by hitting their personalized daily goal for active calories burned, close the Exercise ring by completing at least 30 minutes of daily activity, and close the Stand ring by getting up and moving around for at least one minute during 12 different hours in the day.

Apple Watch users can also complete Monthly Challenges and earn Achievements badges by repeatedly closing the rings in the Activity app, and compete with friends and family, making it a motivating feature for many wearers.

These ads likely represent one of the final marketing campaigns for the Apple Watch Series 3, with new larger-display Series 4 models expected in September. The videos have yet to be uploaded to Apple's main YouTube channel in the United States, or elsewhere, but they likely will be soon.

It's somewhat interesting to know that most of the people I know who own an Apple Watch barely leave their chairs, never mind completing a ring other than one made of onion.

My 81 yr old father has pulmonary hypertension and struggles to walk. He does take pride in closing his standing ring each day. And the HR monitor does help him monitor his a-fib.
Score: 9 Votes (Like | Disagree)

rizzo41999
One last marketing push for the current gen before the refreshers come out.
Score: 8 Votes (Like | Disagree)

Duh, Apple, should have released this ad before summer.

FWIW, it's mid-winter in Australia.
Score: 5 Votes (Like | Disagree)

Relentless Power
It’s actually fairly interesting to see how the Apple Watch transitioned from a fashion device when it first started to where it is now being promoted as a fitness device, and I think this is where the real benefits are for the user, is that it is an excellent tracker and others have proven their successes with weight loss/moving goals with the help of the Apple Watch.
Score: 5 Votes (Like | Disagree)

One last marketing push for the current gen before the refreshers come out.

A good point and one that I've swiftly added to the article!
Score: 4 Votes (Like | Disagree)

TimmeyCook
Duh, Apple, should have released this ad before summer.
Score: 4 Votes (Like | Disagree)
Read All Comments