Last month, Apple initiated a Keyboard Service Program for MacBook and MacBook Pro, after determining that a "small percentage" of the keyboards in 2015-2017 MacBook and 2016-2017 MacBook Pro models may experience keys that feel "sticky," repeat, or do not respond in a consistent manner. 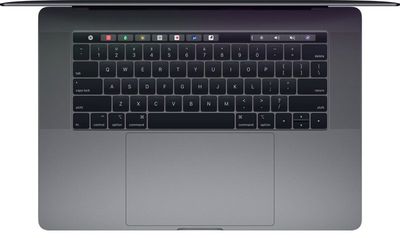 Apple did not identify a cause for the issues, which they call "behaviors," but they're believed to be caused by dust and other particulates becoming stuck in the butterfly switch mechanism underneath keycaps.

Apple has been servicing affected keyboards free of charge, with the process involving the replacement of one or more keys, or the whole keyboard. For the MacBook Pro, the replacements are second-generation keyboards -- often the 2017 variant with slightly different markings on the Control and Option keys.

Then, last week, Apple surprised us with new 2018 MacBook Pro models that feature an "improved third-generation keyboard for quieter typing." These models are not eligible, at least not now, for Apple's service program.

Apple hasn't directly acknowledged whether the quieter, third-generation keyboards dually address the keyboard issues, but iFixit discovered the 2018 MacBook Pro has a thin, silicone barrier underneath each key, which they believe are intended to prevent the dust and crumbs from getting stuck.

iFixit discovered a thin, silicone layer underneath keys on the 2018 MacBook Pro
For this reason, some customers have been hoping that Apple will start swapping out second-generation keyboards with third-generation keyboards, as part of its service program, but MacRumors has learned that isn't the plan.

One possibility is that the third-generation keyboards aren't backwards compatible with 2016 and 2017 MacBook Pro models to begin with. The keyboard is actually one part of a larger component called the "top case," which also has a glued-in battery, and the internal design could be tweaked in 2018 models.

To initiate a repair, head to the Contact Apple Support portal, select Mac → Mac notebooks → Hardware Issues → Keyboard not working as expected → Bring in for Repair and book an appointment with an Apple Store or Apple Authorized Service Provider. Remember to back up your Mac before any servicing.

It wouldn't really make sense, and wouldn't feel very Apple, for them to continue using replacement keyboards that are just as prone to break as the ones they are replacing.

Err, MacRumors you've been around for a few years - you know full well that's exactly the kind of thing Apple does. GPU failures with MacBooks for example - yep, replaced with exactly the same mainboard that suffered the exact same fault several years later.

Your sentence is utterly wrong and misleading.
Score: 43 Votes (Like | Disagree)

It wouldn't really make sense, and wouldn't feel very Apple, for them to continue using replacement keyboards that are just as prone to break as the ones they are replacing.

Most Apple repair programmes I can recall have involved Apple replacing the broken part with an identical part with the same flaw.
Score: 42 Votes (Like | Disagree)

jerry16
Of course not; that would be admitting they screwed up.
Score: 39 Votes (Like | Disagree)

koruki
Remember kids, a condom makes all the difference.
Score: 31 Votes (Like | Disagree)

IbisDoc
Another version of planned obsolescence.
Score: 27 Votes (Like | Disagree)
Read All Comments