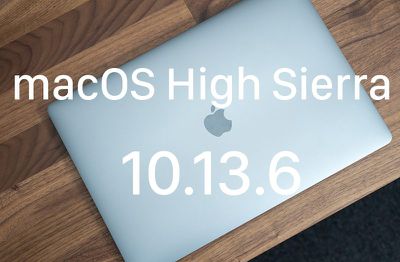 The macOS High Sierra 10.13.6 update is minor in scale, focusing on bug fixes and security improvements. No major feature changes were discovered during the beta testing process, but Apple's release notes say it adds AirPlay 2 multi-room support for iTunes with the accompanying iTunes 12.8 update. Full release notes are below:

The macOS High Sierra 10.13.6 update adds AirPlay 2 multi-room audio support for iTunes and improves the stability and security of your Mac. This update is recommended for all users.

macOS High Sierra 10.13.6 may be one of the final updates to the macOS High Sierra operating system, as Apple in June introduced macOS Mojave, an update that will be launching to the public this fall. macOS Mojave is currently available to developers and public beta testers and will be tested for several months before it sees a launch.

macOS Mojave introduces a system-wide Dark Mode, Desktop Stacks for organizing all of the files on your desktop, several changes to Finder to make it quicker and easier to access and edit your files, Continuity Camera for importing photos to Mac right from an iPhone, and new apps that include Apple News, Stocks, Home, and Voice Memos.

For full details on all of the new features that are coming in the macOS Mojave update, make sure to check out our roundup.

I wonder if Apple will ever do a major upgrade of iTunes.

You do realize that they'd probably ruin it right? iTunes is still great for people who have their own large music library. Any iTunes redesign will probably focus on Apple Music and leave us collectors in the dirt.
Score: 16 Votes (Like | Disagree)

When they drop CD ripping, iPod hosting and playist support for your own audio files its gonna be EPIC!

Yup. I really want to tell all these "They should update iTunes!!!!11111!!1!1oneone" people to be careful what you wish for. iTunes is still one of, if not THE best music library media players in existence. I really can't see anything they could possibly do to improve it, and if they turn it into a clone of the Music app in iOS I will likely be in tears.

Leave iTunes alone. It is stable, works well and does its job near perfectly.
Score: 15 Votes (Like | Disagree)

killawat
Pour one out for all the vintage Macs about to be left in the cold , including every 17" notebook Apple ever offered.

Don't use iTunes for a music collection. Use Plex, it runs fine on a Mac too, but I have dedicated a Linux server to it.

The discussion about iTunes is very old. It always turned out that iTunes can manage a huge 50k + number of tracks extremely well. But one can always try to look smarter.
Score: 5 Votes (Like | Disagree)