Apple's audio device strategy has been highlighted today in a new report by Bloomberg, which looked forward to 2019 and the launch of the "higher-end" third-generation AirPods, next HomePod, and previously rumored over-ear headphones from Apple. 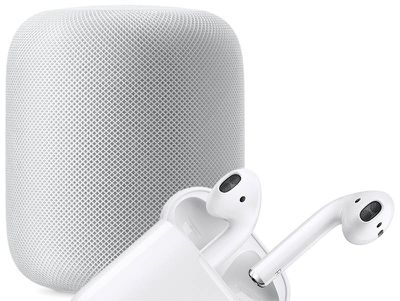 For the AirPods, next year's model is believed to be water resistant "to protect against rain and perspiration," which Bloomberg previously reported in February. In the new report, Mark Gurman and Debby Wu add that Apple is also working to introduce noise cancellation and increase the range that the AirPods can work away from iPhone or iPad, citing people familiar with Apple's plans.

Apple Inc. is about to pump up the volume on its audio-device strategy, planning higher-end AirPods, a new HomePod and studio-quality over-ear headphones for as early as next year, according to people familiar with the matter.

Additionally, the third-generation AirPods -- coming after this fall's expected second-generation update with "Hey Siri" support -- are expected to cost "more than the existing $159 pair." This is believed to cause Apple to "segment" the AirPods line like it does with iPhones, with a lower-cost model and a higher-cost model that has more features. One of these advanced features could also be a biometric sensor "like a heart-rate monitor."

Continuing its audio device push, Apple is eyeing an early 2019 debut for its over-ear headphones, after facing "development challenges" during its original late 2018 launch schedule. Bloomberg described the device as a "higher-end alternative to the company's Beats line," but otherwise didn't give any new details on features that could be coming to the headphones.

Lastly, the report quickly mentions that the second version of the HomePod is set to debut "as early as next year." Apple may also switch production on the smart speaker away from Inventec for the new model, in an overall shakeup of Apple's supply chain in regards to its audio devices. Sources said the company is looking to expand its partnership with Foxconn, which mainly helps manufacture the iPhone, and simultaneously lessen its reliance on Inventec, which helped supply AirPods and HomePod.

While updates to AirPods and HomePod have been expected, rumors first appeared for Apple's "own-branded" over-ear headphones back in February from analyst Ming-Chi Kuo. The audio accessory is expected to be "as convenient as AirPods" but with superior sound quality, active noise cancellation technology, and a price tag aimed at the high-end market.

calstanford
Everything with Apple is always next year next year. Airpods, Airpower, new Macbooks, new iPad, god forbid a Mac Pro or Mac Mini, etc etc
Only consistent thing they care about is the yearly iPhone release (with major new features always coming 'next year')
Score: 27 Votes (Like | Disagree)

44267547
For What it’s worth, I found the AirPods to meet my expectations in almost every level. The sound is adequate, convenience, the battery life, ect. The AirPods is that one purchase that do not hesitate to purchase again for version two.

What I would like to see changed with AirPods in the future, is a hands-free ‘hey Siri’ capability without having to double tap, or maybe even some type of touch capacitive volume controller where you can slide your finger up and down the AirPod.
Score: 24 Votes (Like | Disagree)

dan9700
All we hear is a lot of talk and no action hardware for apple has been so slow recently, even when they announce something it can take years to see it
Score: 13 Votes (Like | Disagree)

recoil80
I think it makes sense to have two versions of AirPods. The first model will have a price drop and I bet they'll start bundling them with iPhone as soon as they remove the lighting port.
I'd love an in-ear version of them, or at least a way to provide some sound isolation.
Score: 8 Votes (Like | Disagree)

All we hear is a lot of talk and no action hardware for apple has been so slow recently, even when they announce something it can take years to see it

For what it's worth, most "talk" comes from reports, not Apple. Apple has been slower than usual as of late, HomePod and some iOS features come to mind, but I think the mindset that they are always late is skewed due to the multitude of reports that we see on this site.
Score: 8 Votes (Like | Disagree)

Rogifan
All of those new AirPods features should come to a second generation of AirPods without having to create another product line. It’s a natural progression of the product. Of course when the obsession is finding ways to get customers to spend more money then the solution is to create pro versions and charge more money for them. It’s one thing to do it with Macs and iOS devices, it’s stupid to do it with accessories.
Score: 7 Votes (Like | Disagree)
Read All Comments

Tuesday October 4, 2022 3:30 am PDT by Hartley Charlton
The European Parliament today voted overwhelmingly in favor of enforcing USB-C as a common charging port across a wide range of consumer electronic devices, including the iPhone and AirPods, by the end of 2024. The proposal, known as a directive, forces all consumer electronics manufacturers who sell their products in Europe to ensure that a wide range of devices feature a USB-C port. This...
Read Full Article • 318 comments