Apple CEO Tim Cook this evening sat down for an interview with Fortune's Adam Lashinsky to discuss education, privacy, human rights, and immigration, and to explain why Apple takes a strong stance on these topics.

According to Cook, Apple has always been about "changing the world" and that's not something that can happen "when you stay quiet," but there are no specific guidelines that Apple follows when deciding to speak out. 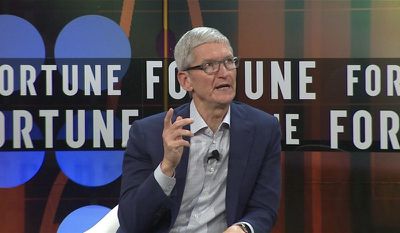 We've always been about changing the world and it became clear to me some number of years ago that you don't do that by staying quiet on things that matter. For us, that's been the driving issue. There's no formula for when you speak and when you don't. The way I think about it... is it something Apple has a special expertise on? I don't want Apple to be another talking head. We should only speak when we have specific knowledge to bring to the subject.

Do we have standing? Do we have a right to talk about this issue? It's not enough to be a large company to speak. I think about that, and so what that means for us is that we typically speak about education, privacy, human rights, immigration, and the environment because there's something we have where we can bring a point of view -- it may be discounted and most people may view it to be incorrect -- but nevertheless it is a point of view we can share.

Cook went on to say that he doesn't think businesses should deal only in commercial things. "Business to me is nothing more than a collection of people and if people have values -- and I argue we should -- then by extension companies should have values." Companies should speak out after evaluating whether or not a subject is a core value, says Cook.

Ask yourself -- is it a core value of your company? [...] If something happens that isn't consistent with those, then I think you need to speak. Think about if you don't -- then you're in the appalling silence of good people category and this is something I've never wanted to be a part of.

Apple has spoken out on immigration specifically because Apple employs many immigrants. "We've got over 300 folks here on DACA," Cook said. "I want to stand up for them." Apple also has several thousand people that are on H1B visas who may be in "the deep green card back log," which Cook says gives Apple a unique perspective to share on the topic. "There are real people behind this that have real feelings," he explained.

As for diversity, Apple "has a lot of different people from a lot of different places" and is "accepting of people everywhere" which has led Cook to believe that the company has something unique to offer in conversations about diversity, which is also tied to the company's views on human rights and one of the reasons why Cook spoke out on recent U.S. immigration policy that saw children separated from their parents, which he called "inhumane." "Ultimately, that is what human rights are, treating people with dignity and respect," he told Lashinsky.

While Apple is quick to speak out on policies surrounding immigration, diversity, human rights, and similar topics, Cook clarified that Apple does not "get into politics."

In response to people who think companies should stick to making good products and making good money rather than, Cook said he doesn't believe the majority of people want that. Apple, he reiterated, does not get into politics -- it's about policy.

The CEO of Apple is never going to fulfill the mission of changing the world in today's environment by doing that. You're not going to be able to do all that you can by staying quiet.

On the topic of privacy, Cook said that Apple's view on privacy started from its values and then its business model was built to live up to those values.

We felt strongly about privacy when no one cared. We could not see the specific details, but we could see that the building of the detailed profile of people likely would result in significant harm over time. That it could be used for too many nefarious things. We think that people in today's environment don't have a full view of who has what and how much of their lives has been opened to commercial entities and public entities.

Cook discussed Apple's newly announced decision to add a curated Midterm Election section to the Apple News app. Cook said Apple has always believed in curation, pointing towards the App Store. "We felt like this is our store and it says something about us as to what's in there," he said. "And so we've done that from day one and we've taken that same view to news."

Apple added a news section because "news is going kind of crazy." It doesn't mean, however, that people who use an iPhone have to rely on Apple News, because users can "get content from anywhere else" if they "don't like it."

Cook says that Apple wants to make sure people are reading content that's not created "strictly with the goal of enraging people." The company wants to focus on "content that has a reason to be out there," with news to be sourced from conservative outlets, liberal outlets, and "in between if there is such a thing anymore." Cook says the 2018 Midterm Election section of Apple News will include a spectrum of content from a variety of sources with no specific political agenda.

There were also some questions relating to the new Screen Time feature in iOS 12, and Cook says Apple never wanted people to overuse its products. For him, Screen Time has caused to cut down on iPhone usage, specifically when it comes to notifications, because the number of notifications he was receiving was "crazy." "We want everyone to have this information," he said. "And then you can do what you want with it."

The final topic of discussion was on long term vs. short term investments, and Cook said that Apple often makes investments that are 7 to 10 years out. If he was "king for a day," 90 day earnings reports "would be flushed" because they're a "remnant of a different day and time." Cook said that as a CEO, when it comes to dealing with the board on short term performance, "you have to look yourself in the mirror and say I'm going to take the heat."

The interview wrapped up with Lashinsky asking Cook how long he planned to be CEO, with his seventh anniversary approaching. "It is the privilege of a lifetime to be at Apple and to lead the company and hopefully I've got some good time left," answered Cook.

Cook's full interview may be made available by Fortune at a later date, and if that's the case, we'll update this post with a link so that it can be watched in its entirety.

bladerunner2000
I wish he talked making a good computer. He's been selling us a garbage Mac Pro for the last 5 years.
Score: 90 Votes (Like | Disagree)

DakotaGuy
Tim Cook... always talks about everything except the Mac. They need to get rid of him and he can go into politics where he belongs. Time to bring back a product visionary like Jobs to run Apple. Scott Forstall is my pick.
Score: 71 Votes (Like | Disagree)

Rogifan
“Apple doesn't give one dollar to political campaigns.”

But Apple executives give lots of money to political parties/candidates.

adamjackson
It's certainly wearing on me these interviews. So many now about the same thing. It's fine, what he's standing for is fine, nothing against the message, I just want the CEO of a tech company to talk a little bit more about technology.
Score: 49 Votes (Like | Disagree)

Lone Deranger
I honestly can’t remember the last time Tim Cook spoke about the Mac with the passion that he does about politics.
The only words he has for it are the usual cheesy, insincere footnotes: “We care about the Mac. The Mac is important to us.” Etc.
But nothing of actual substance.

His heart just isn’t in it. Certainly not in the way Steve’s and Scott’s were, and it’s shows.