Apple appears to have opened a new engineering hub in Oregon, expanding the company's presence in the Pacific Northwest tech sector. 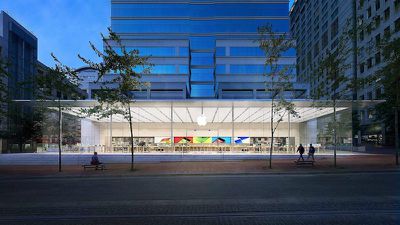 Apple Store at Pioneer Place in Portland
The Oregonian via Patently Apple reports that the offices are located in Washington County, near the border between Beaverton and Hillsboro, in the western suburbs of Portland. The building's exact location has not been disclosed.

Apple has already hired close to two-dozen employees to work at the hub, including a number of people who previously held senior research or engineering roles at chipmaker Intel, according to the report. The information was gathered from job postings, social media profiles, and a person familiar with the matter.

Apple poaching Intel engineers has fueled speculation about its rumored plans to release the first ARM-based MacBook as early as 2020, although it's common for major companies to recruit talent from each other.

Intel's largest concentration of facilities and talent is located in Washington County, with four campuses and approximately 20,000 employees as of the end of 2017. Notably, Intel has CPU design teams based out of Oregon that lead development of processors based on 14nm and 10nm fabrication processes.

MacRumors performed a basic job search on Apple's website and came across listings for hardware engineers with expertise in design verification and validation of Apple's system-on-a-chip designs, like the A11 Fusion chip in the latest iPhones. All of the openings have a listed location of Portland, Oregon.

Apple has existing operations in the region, including a software development team in Vancouver, Washington, a data center site in Prineville, and an advanced computation group in southeast Portland, according to the report.

Apple's presence in the Pacific Northwest extends to Seattle, where it has an artificial intelligence and machine learning hub. The company also continues to lease additional office space near its headquarters in Cupertino, California, while exploring areas for a new campus focused on technical support.

More like every passing day. I use Google Assistant quite a bit and I swear it gets better by the day. When I use Siri it never seems to improve.

* Not able to set simple things like timers sometimes
* Saying a theater that is about five miles away is 27 miles away
* Hearing "Showtimes for Avengers Infinity War Independence AMC 20" as "Showtimes for Avengers IT Independence AMC 20" and then not able to find the movie
* Telling me that my front door lock isn't connected after it already unlocked my door. It does this a lot.
* Telling me that I haven't setup HomeKit after it has already adjusted my thermostat
* Not able to find my "Shopping list" to add something to. I ask the same query again and suddenly it works. I check the display and both queries were interpreted by her correctly when the text to speech was processed.

* Doing one of those new knock knock jokes, I asked "Dwayne who?" and she started playing "In Hell" by Twiztid, which is a song, band and genre that I've never listened to before.
* She thought she heard me say Chris when I didn't, and she matched it to some guy named Michael in my address book
* Lots of cutting me off mid-sentence. One time it cut me off and she snarkily responded "Perhaps you should get a Magic 8 Ball" and that just pissed me right off.

* Had a gift card for Dairy Queen for some reason, asked her "Where is Dairy Queen" and she responded with "OK, one option is Dairy Queen, which averages 4 stars and is inexpensive." Thought that was a pretty weird response.
* Putting the query into the reminder and not getting the time. For instance when I was meeting a contractor at my house: "Remind me tomorrow at 4:30 to go home to meet with David" the reminder when it popped up said "Tomorrow at 4:30 to go home to meet with David" and it set it for 12:00pm the next day, lol
* Having to structure questions in a specific way. For instance, asking "When is the high tide" returns information about a movie called "High Tide". Then when I followed up that query immediately with "When is the next…" and it cut me off at "next", it somehow correctly pulled up the high tide information!

* During the Superbowl I asked if the Eagles have ever won a Superbowl and she told me the "NFL season is over" and then gave me information about the current score of the Superbowl, which was still in the 3rd quarter

She also does more things that piss me off. I asked her the temperature and she went on this long spiel saying:

Why do I need to hear a joke and wait so long just to get the damn temperature? I was even walking outside for crying out loud so the joke didn't make sense in context.
[doublepost=1527777848][/doublepost]

"Throw the baby out with the bathwater"
Maybe Apple needs to start afresh, deprecating Siri to legacy, and chuck it to a failed, first-attempt, towards an automated assistant.

My view
Siri simply lacks referential context and, cannot thread any kind of conversation. In the best of cases, her only hope is to understand, and act on, one sentence at a time.

This is easily Apple's worst this century.

Technically the hockey puck mouse was still shipping for a little while in the year 2000. But then we get into the whole "Is the year 2000 this century or does it start in 2001" debate, lol.
Score: 4 Votes (Like | Disagree)

sirozha
Vancouver is not in Oregon.
Score: 4 Votes (Like | Disagree)

Vancouver is not in Oregon.

Whoops—haven't had my morning coffee clearly. Fixed that, thanks.
Score: 2 Votes (Like | Disagree)

CWallace
Hillsboro is where Intel does a significant portion of their chip design so it could be a sign of more direct collaboration between Intel and Apple on chips (CPUs, modems, chipsets, etc.).
Score: 2 Votes (Like | Disagree)

Vancouver is not in Oregon.

Haha it was supposed to be. :) That was my fault. I moved to Portland in 1991 after we shipped ClarisWorks 1.0, hoping to drag the rest of the team with me. My partner Scott Holdaway helped twist Claris' arm so they were forced to relocate the team. But Claris insisted on Vancouver instead of Portland, because it was cheaper. I should have put my foot down...

kemal
Couldn't Apple set up a design team in the back of a Newark Best Buy? When the store closes they could steal motherboards out of the PCs on display and make a Mac Pro.
Score: 2 Votes (Like | Disagree)
Read All Comments