Starter Plan users can create an unlimited number of XD documents, expert assets for production, and create videos. One design prototype and one design spec at a time can be shared, with a paid plan available to enable unlimited sharing. 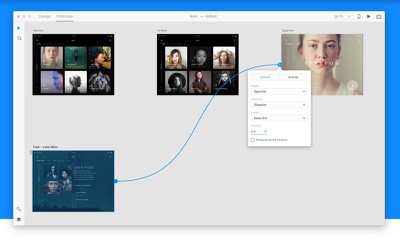 "UX design is one of the fastest growing segments in design," said Scott Belsky, chief product officer and executive vice president, Creative Cloud at Adobe. "The new Starter plan for Adobe XD supports Adobe's vision to give everyone--from emerging artists to enterprise brands--everything they need to design and deliver exceptional digital experiences and explore the rapidly expanding field of UX design with no financial commitment."

In addition to the starter plan, Adobe XD is gaining new features and workflow enhancements including improvements to Sketch and Photoshop CC integrations, password protection for design specs to restrict who can view files, drag and drop options for swapping symbols, and the option to paste to multiple artboards. More information on the improvements can be found in Adobe's blog post covering the update.

In the near future, Adobe plans to roll out advanced prototyping and animation capabilities, new team collaboration features, and new plug-in options.

Adobe XD is free as of today and can be downloaded from the Adobe XD website. Existing Adobe XD plans will continue to be available, with the $9.99 Adobe XD Single App plan offering Creative cloud members unlimited shared prototypes and design specs. Customers who subscribe to a Creative Cloud all apps plan have full access to unlimited sharing. More information on XD plans can be found on Adobe's website.

Wash08
give me a single payment for the software and I upgrade when I want to, or you don't get a dime from me. I'm happy using Affinity Photo and Affinity Designer and other apps for my projects and I am happy as a clam.
Score: 6 Votes (Like | Disagree)

DrNevs
I guess because they came to terms that it's functionality isn't worth paying for.
Score: 3 Votes (Like | Disagree)

e-coli
The beginning of the end of Sketch. Sketch is a great app, but its lack of integration into the rest of your design workflow makes it inconvenient. Ironically, XD doesn't integrate with any of the other Adobe apps either. XD has a lot of promise, but has a long way to go.
Score: 3 Votes (Like | Disagree)

Isn't Sketch pretty much a industry standard at this point? I mean at least around me it is.

I like XD as a replacement for Photoshop. But if you're working with Sketch and showcasing prototypes in InVision and with InVision's Studio in beta now, I don't really see a place for XD.

It’s more going to come down to XD or InVision. XD does a lot of the click through prototyping in app. I look at is I don’t really see much of need for InVision.
Score: 1 Votes (Like | Disagree)

XD should have smart symbol integration with Illustrator, and linked files instead of simply placed files. Both programs should have this, but especially XD. Typography controls in Sketch are pretty poor. I hope XD implements the Adobe type controls. Also exporting any design or art you’ve created in Sketch is a frustrating exercise. Sketch to PSD is really frustrating, and Sketch to AI is arguably worse. I hope XD addresses these things to become more workflow friendly than Sketch is.

Glad to see CC libraries working. That’s a feature we’ve been using increasingly over the past year and a half.

I like Sketch, but it lives in its own bubble. Would be great to see a robust and flexible competitor.

I suppose because we aren't using Adobe's product for anything digital, the integration with Photoshop and Illustrator doesn't mean much to us. Obviously our print team is using Adobe but on digital side, we don't see a use for it (besides the occasional edit I'll need to do to a photo).

Ultimately, we just care about the developers and integration with InVision, which has just been phenomenal (and with Studio on the way, the level of quality with our prototypes is outstanding). But I see what you're saying about issues with Adobe.
Score: 1 Votes (Like | Disagree)

keysofanxiety
I can never unsee that emoji in the title, no matter how many times I've seen it mentioned... XD
Score: 1 Votes (Like | Disagree)
Read All Comments