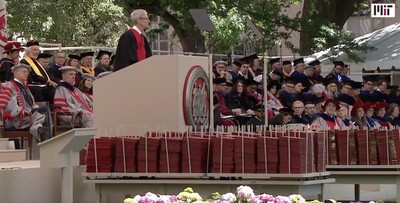 Cook first reflected on his inability to figure out what the purpose of his life is, while poking fun at Windows PCs in the process. For context, Cook briefly worked at former PC maker Compaq in early 1998 prior to joining Apple.

I tried meditation. I sought guidance and religion. I read great philosophers and authors. In a moment of youthful indiscretion, I might even have experimented with a Windows PC. And obviously that didn't work.

Cook's search eventually led him to Apple in 1998, when the company was flirting with bankruptcy and struggling to survive.

Tim Cook appears around 7:00 mark
Working with Apple co-founder Steve Jobs, Cook said he eventually learned "life's biggest and most important question" being "how can I serve humanity?"

It was in that moment, after 15 years of searching, that something clicked. I finally felt aligned with a company that brought together challenging, cutting edge work with a higher purpose. Aligned with a leader who believed that technology which didn't exist yet could reinvent tomorrow's world. Aligned with myself and my own deep need to serve something greater. Of course, at that moment I don't know all of that. I was just grateful to have a psychological burden lifted. But with the help of hindsight, my breakthrough makes more sense. I was never going to find my purpose working some place without a clear sense of purpose of its own. Steve and Apple freed me to throw myself into the work and embrace their mission and make it my own. How can I serve humanity? This is life's biggest and most important question.

Cook concluded his speech by saying he's "optimistic" in the next generation's own journey to serve humanity.

As you go forward today, use your minds and your hands and your hearts to build something bigger than yourselves. Always remember there is no idea bigger than this: as Dr. Martin Luther King said, we are all bound together in a single garment of destiny. If you keep that idea at the forefront of all that you do, if you choose to live your lives at that intersection between technology and the people it serves, if you strive to create the best, give the best, and do the best for everyone—not just for some—then today all of humanity has good cause for hope. Thank you very much.

Cook toured the MIT campus on Thursday. "So impressed by MIT students and faculty who are finding new ways to tackle the world's biggest challenges," he tweeted. "Thanks for sharing your work!"

SteveJobs2.0
Serving humanity?! That's certainly an interesting way to look at a career in developing luxury goods with record-setting levels of markup.
Score: 77 Votes (Like | Disagree)

bladerunner2000
How can I serve humanity? This is life's biggest and most important question.

You could start by allowing consumers to have the right to repair their Apple products. Or not practice planned obsolescence. Or sell products that aren't artificially priced. Or give consumers proper options. Or not evade taxes. Or not stifle innovation.
Score: 65 Votes (Like | Disagree)

SMH! Another cringe moment from this Guy! Tim cook Focus on innovation rather than making fun of other companies

Why would you be shaking your head? Cook can have a little humor too. It's normal. Not everything Cook does has to focus on innovation.
Score: 58 Votes (Like | Disagree)

sirdir
Hint: If you want to serve humanity, don't avoid taxes to that extent.
Score: 52 Votes (Like | Disagree)

lunarworks
Things people do with their lives:

Everyone Here - Complains about it on the internet.
Score: 46 Votes (Like | Disagree)
Read All Comments