Apple is set to close its last remaining pop-up shop dedicated to Apple Watch next month. Signs displayed at the Tokyo shop, located in Shinjuku's high-end Isetan department store, were shared on Twitter announcing the closure. 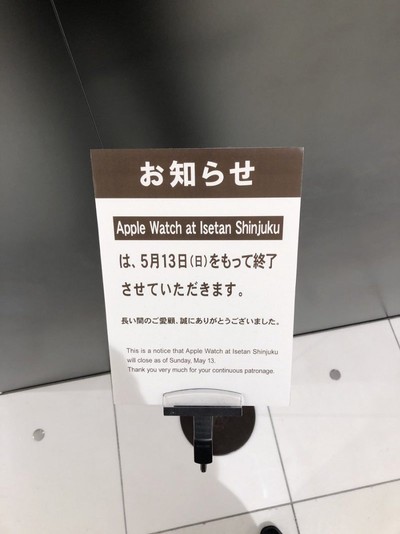 The message reads, "This is a notice that Apple Watch at Isetan Shinjuku will close as of Sunday, May 13. Thank you very much for your continuous patronage."

The closure of the pop-up shop follows last month's opening of Apple's Shinjuku store, which is situated directly opposite Isetan and offers the full range of Apple products and services, including Apple Watch.

Japan's pop-up shop is notable for being the first of its kind to open, coinciding with the launch of the original Apple Watch in 2015. Apple has only operated three pop-up shops worldwide selling Apple watches and bands. The other two operated out of Galeries Lafayette in Paris and Selfridges in London. Both closed in 2017.

The closures appear to be part of Apple's recent strategy of promoting Apple Watch as a health and fitness accessory first and a haute couture fashion detail second. The pop-up shops specialized in selling Apple Watch Edition models, gold versions of which sold for at least $10,000 and up to $17,000 when they hit the market.

The pop-up shops were essentially outlets for Apple's remaining inventory of 18-karat Gold and Rose Gold Apple Watch Edition models, which were discontinued in 2016 and replaced with the ceramic Edition models the company continues to offer online and in-store to this day.

Pop-up implies eventual pop-down after the pop-ulation is satisfied or the item proves generally pop-ular or absolutely un-pop-ular.

The original Edition watches were more of a perception-smashing marketing gimmick designed to break the snob-appeal of high-end mechanical timepieces.

Given that an Apple Watch does all the functions, except being like jewelry, that high end watches do, the Edition was necessary to move people beyond the aesthetic hang-up they would have against a black screen and something akin to Geek Wear. The gold Edition served this purpose and Apple Watch has cemented its place at nearly the top of the Watch industry.

So no great surprise that the pop-up are popping-down now as their customers can buy through conventional channels now. And if the ultra-spenders don’t replace, but go back to Swiss watches? No big deal because they are a rarified slice of the overall market, a market that Apple now is #2 in (within 3 years of entry.)
Score: 16 Votes (Like | Disagree)

AngerDanger
Eh, "Pop-up shop" is a term that never lived up to expectations anyway…

CJM
I couldn't believe the marketing strategy for the original Apple Watch as a fashion accessory. I really think that was the pinnacle of the recent climb in Apple snobbery. Apple has always been about making cool products that look good, but the primary focus has been to improve people's lives in some way. The cool, fashionable aspect has always just been a given - a byproduct of thoughtful design - and hasn't needed to be forced on buyers, like the watch's marketing in 2015.

The shift to fitness first, and then the watch being an emblem of athleticism and therefore coolness, is much more effective.

Please provide a citation for “snobby”.

Earliest records date back somewhere after the departure of John Browett and the hiring of Angela Ahrendts. Not to put too fine a point on it.
Score: 6 Votes (Like | Disagree)

However, when the Apple Watch first launched, it was promoted heavily as a fashion statement, especially given they launched an 18 karat gold Apple Watch starting at $10,000. Most of the marketing towards the Apple Watch when it first launched was also geared towards being a fashion statement, however; since the transition with the heart rate sensor inrovements, swimming features, and even the most current marketing is focused on health related features. So it’s making a transition from where first started, which I believe likely for the Series 4 we will see additional health sensors and more health oriented applications, and eventually glucose monitoring, which the future the Apple Watch will rely on health advancements.

I think they wanted to market it as a fashion item at the beginning but they didn't sell enough edition models and found out it was easier to promote it as a fitness device.
Score: 5 Votes (Like | Disagree)
Read All Comments

Friday July 30, 2021 9:04 am PDT by Sami Fathi
Tesla CEO Elon Musk reportedly once demanded that he be made Apple CEO in a brief discussion of a potential acquisition with Apple's current CEO, Tim Cook. The claim comes in a new book titled "Power Play: Tesla, Elon Musk and the Bet of the Century," as reviewed by The Los Angeles Times. According to the book, during a 2016 phone call between Musk and Cook that touched on the possibility of ...
Read Full Article • 274 comments