The United States Department of Justice today launched an antitrust investigation to determine whether U.S. carriers, including Verizon and AT&T, have coordinated to prevent consumers from easily switching wireless carriers, reports The New York Times.

AT&T, Verizon, and GSMA, an industry group that sets mobile standards, were asked in February for documents related to their efforts to hinder the implementation of eSIMs. An embedded SIM, or eSIM, is a standardized chip that's designed to replace a physical SIM card. 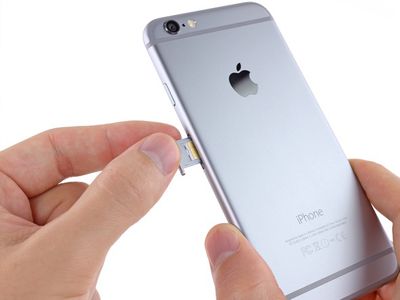 A physical SIM card slot in an iPhone, via iFixit
With eSIM technology, there is no need to swap out SIM cards when switching carriers, making it easier to make a switch from one carrier to another. eSIMs are designed to be compatible with all major carriers, regardless of network type.

eSIMs are a major change from physical SIM cards, which require customers who wish to switch carriers to obtain a new SIM card when changing providers. eSIMs make it simpler for customers to swap carriers while traveling, and, of interest to device makers, they free up space currently taken up by a SIM card.

AT&T and Verizon are accused of colluding with the GSMA to create standards that would allow devices with eSIM technology to be locked to their networks. Representatives from the two carriers attended a meeting for a private task force called GSMA North America earlier this year and advocated for the ability to keep eSIM devices tied to a single carrier.

Verizon reportedly claimed that phones needed to be locked to its network in order to prevent theft and fraud.

At the heart of the investigation is whether the nation's biggest wireless carriers, working with the G.S.M.A., secretly tried to influence mobile technology to unfairly maintain their dominance, in a way that hurt competition and consumers and hindered innovation in the wider mobile industry.

AT&T and Verizon together control about 70 percent of all wireless subscriptions in the United States. A technology that made it easy to switch carriers could lead to more churn and fewer subscribers for them.

The Department of Justice launched began the probe several months ago following formal complaints from at least one device maker and one wireless carrier. The investigation may include other carriers beyond Verizon and AT&T.

AT&T, Verizon, and other U.S. carriers have long resisted features that would make it easier for customers to switch carriers at will without being tied to a specific network. Verizon, for example, refused to allow Apple to offer Verizon service through the Apple SIM built into newer iPads. The Apple SIM, a multi-carrier SIM card, is designed to make it easier for customers to choose a carrier after an iPad purchase and switch to a new carrier when traveling.

Apple, Google, Microsoft, and other wireless carriers in the United States are proponents of the eSIM. Apple, for example, is said to want to use eSIM technology in its 2018 iPhones, but may instead opt for dual-SIM technology because "some carriers are resistant to the idea."

Apple has already implemented eSIM technology in the Apple Watch Series 3 models equipped with LTE connectivity. The eSIM is also a feature of the Google Pixel 2 smartphone and the Microsoft Surface.

Update: According to CNBC, all four major U.S. carriers received requests from the U.S. Justice Department.

Update 2: Apple is one of the companies that submitted a complaint to the Department of Justice, according to Bloomberg.

826317
And people say the free market will get rid of these types of practices... I'm all for the free market, but there needs to be at least some form of regulation..
Score: 42 Votes (Like | Disagree)

JPack
It now makes sense why U.S. consumers are in the dark about dual-SIM phones. And questioning the need for it.

Time to wake up and see how the rest of the world works!
Score: 18 Votes (Like | Disagree)

whyamihere
The sooner these companies accept the fact that they are nothing more than a dumb pipe and a means to an end, the better for everyone. I still find it absolutely ridiculous that I can't pre-order a new iPhone each year (paid in full) without being forced to prove an existing wireless account with the big 4.
Score: 10 Votes (Like | Disagree)

Say it isn't so. How could such benevolent companies possibly be associated with such a term?

What would happen next? Something as crazy as...

JackieInCo
I refused to activate my iPad Pro on AT&T because I knew the eSim would be looked to AT&T. I only used T-Mobile because of this

This is proof that all carriers are shady in some way.
Score: 6 Votes (Like | Disagree)
Read All Comments