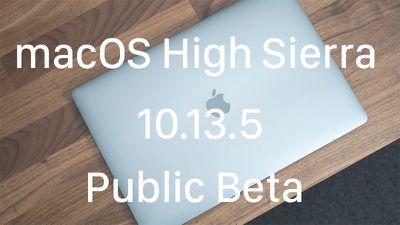 Messages on iCloud is designed to store your iMessages in iCloud for improved syncing. Right now, incoming iMessages will be sent to all devices where you're signed into your Apple ID, but it's not true cloud-based syncing because your old messages don't show up on new devices nor does deleting a message remove it from all of your devices, both features enabled through Messages on iCloud.

The Messages on iCloud feature also allows your older iMessages to be stored in iCloud rather than on your iPhone, iPad or Mac, saving valuable storage space. Older attachments are also stored in iCloud.

No other major outward-facing changes were discovered in the first two developer betas, but the update likely includes bug fixes and improvements to address issues discovered since the release of macOS High Sierra 10.13.4. Because Apple does not provide detailed release notes for macOS High Sierra updates, we may not know exactly what's included until the new software is provided to the public.

Mac32
If you still haven't updated to High Sierra, DON'T. Sierra was a better OS, and there are no real benefits with High Sierra (unless you want to use an eGPU). It's basically the same system with a new slower file system (vs HFS), startup and overall response is slightly slower, there are various bugs depending upon which Mac model you use etc...etc... The latest 10.13.4 update made things worse, not better (introduced new bugs with both my iMac Pro and MacBook). This is like walking backwards into the future.
Score: 7 Votes (Like | Disagree)

crescentmoon
I have the latest HS on my mid 2010 mac pro and it is the stablest OS so far for my computer. I was on sierra but I was getting system freezes that multiplied after the security updates. There has not been one system freeze or crash since updating to HS 10.13.4
Score: 5 Votes (Like | Disagree)

ipponrg
I'm still on El Capitan on my work laptop, and Sierra on my home laptop.

Am also afraid to upgrade :D
Score: 3 Votes (Like | Disagree)

I still don't get it. I can open multiple PDFs and drag and drop thumbnails of any page to any document and rearrange the oder.

works for me as usual as well
Score: 2 Votes (Like | Disagree)

I have the latest HS on my mid 2010 mac pro and it is the stablest OS so far for my computer. I was on sierra but I was getting system freezes that multiplied after the security updates. There has not been one system freeze or crash since updating to HS 10.13.4

You said HS has been crap. I gave an example of a specific HS-only feature saving me several hundred pounds.

Ok, fair. We have completely different usage scenarios, and I admit I had overlooked this feature.

Speaking from the shoes of a designer working with multiple displays and I/O means, High Sierra (and the new MBP) have offered me nothing but setbacks.
Score: 1 Votes (Like | Disagree)
Read All Comments