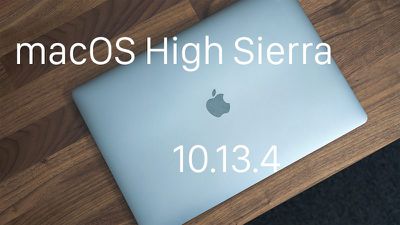 macOS High Sierra 10.13.4 introduces bug fixes and performance improvements for issues that have been discovered since the release of macOS High Sierra 10.13.3. The update brings support for Business Chat, which will allow you to interface with businesses like Wells Fargo and Lowe's right in the Messages app, and it includes official support for external graphics processors (eGPUs).

There are also several other small bug fixes and tweaks, as listed in the release notes:

The macOS High Sierra 10.13.4 update improves the stability, performance, and security of your Mac, and it is recommended for all users. This update:

- Adds support for Business Chat conversations in Messages in the US
- Adds support for external graphics processors (eGPUs)
- Fixes graphics corruption issues affecting certain apps on iMac Pro
- Allows jumping to the right-most open tab using Command+9 in Safari
- Enables sorting Safari bookmarks by name or URL by right clicking and choosing "Sort by..."
- Fixes an issue that may prevent web link previews from appearing in Messages
- Helps protect privacy by only AutoFilling usernames and passwords after selecting them in a web form field in Safari
- Displays warnings in the Safari Smart Search Field when interacting with password or credit card forms on non-encrypted web pages
- Displays privacy icons and links to explain how your data will be used and protected when Apple features ask to use your personal information

The update also introduces the smoke cloud wallpaper that was previously only available on the iMac Pro and it introduces a warning when opening up a 32-bit app as part of an effort to phase them out.

In the future, Apple plans to phase out 32-bit Mac apps, just like it did with 32-bit iOS apps. Apple says macOS High Sierra is the last version of macOS that will support 32-bit apps "without compromises."

JesperA
Finally able to sort bookmarks in Safari, a small thing but been waiting for this since 2008 ;)
Score: 25 Votes (Like | Disagree)

superduperultra
No AirPlay 2 no Messages in iCloud, sad.
Score: 16 Votes (Like | Disagree)

bladerunner2000
eGPU support is long overdue. Why is Apple always late to the game on these kinds of things?
Score: 16 Votes (Like | Disagree)

High Sietra sucks man,so many un-solved issues and it visibly slowed down my 12" Macbook.
Worst version of Mac OS ever.
I re-installed El Capitan which is the version my Mac was originally shipped with.
Much snappier now.
Everyone should consider remaining on the original version of the Mac OS their system wasshippedwith,specially 12" MacBook owners with m CPU.
I don't trust Apple or anyone else saying performance won't be slowed down at all.
Seeing (feeling) is believing.

Haha I'm not going to install Snow Leopard on my 2011 MBP. High Sierra runs great on this thing.
Score: 14 Votes (Like | Disagree)

ColdShadow
High Sietra sucks man,so many un-solved issues and it visibly slowed down my 12" Macbook.
Worst version of Mac OS ever.
I re-installed El Capitan which is the version my Mac was originally shipped with.
Much snappier now.
Everyone should consider remaining on the original version of the Mac OS their system wasshippedwith,specially 12" MacBook owners with m CPU.
I don't trust Apple or anyone else saying performance won't be slowed down at all.
Seeing (feeling) is believing.
Score: 11 Votes (Like | Disagree)

moabal
I first thought they were going to delay iMessage iCloud sync until the new High Sierra Version was released. I guess I was wrong. This sucks.
Score: 10 Votes (Like | Disagree)
Read All Comments