Linus Sebastian, who runs the popular YouTube channel Linus Tech Tips, recently shared a video in which he claimed Apple and an Apple Authorized Service Provider denied to service his damaged iMac Pro. 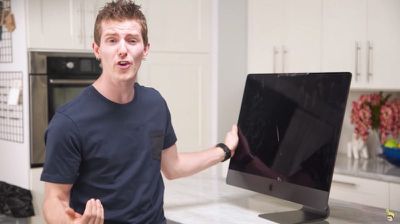 For background, Sebastian and his team fully disassembled the iMac Pro in January for their video review, which shows components like the main logic board and memory modules laid out individually. The real-time footage of the damage occurring in the new video appears to be a reenactment with visual effects.

The damage resulted when they dropped the display while attempting to reattach it to the aluminum chassis. Towards the end of the video, Sebastian also says the iMac Pro requires a new logic board and power supply unit, suggesting there may have been a short circuit that caused damage to internal components as well.


Sebastian contacted Apple to inquire about repair options, and visited the Genius Bar at an Apple Store, but the company ultimately declined to service the iMac Pro. In an email, an Apple support advisor placed blame on limited availability of replacement parts, but the actual reason is likely rooted in policy.

As has long been the case, Apple's terms and conditions for repairs stipulates that the company will not service products that have failed due to "unauthorized modification," including "faulty installation, repair, or maintenance by anyone other than Apple or an Apple Authorized Service Provider."

Apple's limited one-year warranty is also void if a product has "damage caused by service, including upgrades and expansions, performed by anyone who is not a representative of Apple or an Apple Authorized Service Provider."

In his defense, Sebastian confirms he is aware of those policies, but his argument is that Apple should still be obligated to repair the iMac Pro if he pays out-of-warranty fees. In the video's comments section, reaction is mixed, with some people agreeing with him and others siding with Apple.

iMac Pro is a non-user-upgradeable, all-in-one workstation by design, so it's easy to see why Apple may not be interested in servicing one that was fully disassembled. While the team at Linus Tech Tips may be more tech savvy than some, a lot can go wrong when an average customer tampers with internals.

After the repair was declined by Apple, Sebastian and his team contacted an Apple Authorized Service Provider in Canada, where they are located. The repair shop also declined the repair, but their reason was allegedly that Apple has yet to offer the required certification courses to service the iMac Pro.

However, Apple's internal iMac Pro Service Readiness Guide obtained by MacRumors states that ATLAS online training and learning resources for servicing the iMac Pro have been available in English since December. We also spoke to multiple sources who completed the course and received certification months ago.

MacRumors contacted a reliable source who confirmed that Apple Authorized Service Providers are permitted to deny service for any product that has been opened or modified by a customer, regardless of warranty, both for safety reasons and to avoid responsibility if the machine cannot be fixed.

In the end, Apple has to draw a line somewhere, and not everyone will agree with it. MacRumors contacted Apple, but a spokesperson declined to comment. We've also contacted Linus Tech Tips for comment.

outskirtsofinfinity
He's a YT millionaire and is just whoring for more more clicks, and you just gave it to him. What a drama queen. #histrionics
Score: 151 Votes (Like | Disagree)

Nikiaf
It seems that nobody actually watched the video and understands what the story is...

The main point is that Apple refused to ship the replacement parts to an authorized third-party reseller because working on the iMac Pro requires a special certification that doesn't even exist yet, and it sounds like no repair instructions have been written either. Assuming this is actually true, that's quite unimpressive of Apple to release a product that they themselves don't even know how to fix.
Score: 123 Votes (Like | Disagree)

Markoth
I suppose an overreaction here was inevitable. He said he knew he'd have to pay for the repair, and was fully willing to pay for it, completely uncovered by warranty, but they outright refused to repair it, regardless. Makes no sense to me.

They are willing to repair it themselves but they can't get Apple or an authorized 3rd party to sell them the required parts
Score: 83 Votes (Like | Disagree)
Read All Comments