On Monday, Apple introduced new (PRODUCT)RED models of the iPhone 8 and iPhone 8 Plus, which went up for pre-order on Tuesday and are available to purchase in Apple Stores as of today. Since it's an Apple product launch day, customers interested in the new iPhone 8 color can visit Apple.com to check stock at their local Apple stores and arrange for an in-store pickup on the smartphone.

Apple's iPhone availability tool shows that the new (PRODUCT)RED iPhone 8 and iPhone 8 Plus devices should be easy to obtain today at most Apple stores across the United States and in other countries, in both 64GB and 256GB. Those who don't feel like picking up at an Apple store, or who don't live nearby one, can also choose to have the iPhone delivered via free next day shipping. 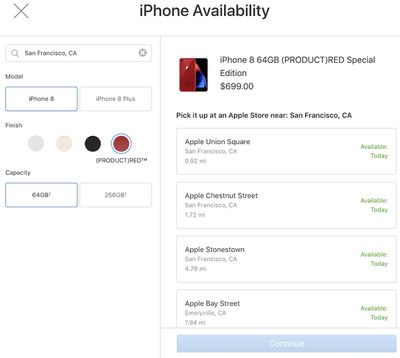 The unlocked/SIM-free prices of each new model can be found below:

The (PRODUCT)RED iPhone 8 has all of the same internals and hardware as the models that launched last September, including a glass body for wireless charging, A11 processor, True Tone display, and more. In the box, you'll get EarPods with a Lightning Connector, Lightning to USB cable, 5W USB power adapter, and a Lightning to 3.5mm headphone jack adapter.

I truly don’t get the fascination of (PRODUCT)RED’s devices, but I am happy for those who do.

Are you kidding? The Geekbench scores speak for themselves:

* The (PRODUCT)RED iPhone 8 is over 38% more red than previous iP8s.
* Its chromatic caching is up to 630nm (from a more orange 590).
* The (PRODUCT)RED moniker is 265% more difficult to format correctly than even the leading Android device.

This is, without a doubt, the reddest iPhone 8.
Score: 8 Votes (Like | Disagree)

Keenanryan14
I’m highly considering selling my iPhone X and getting the iPhone 8+ in red I’ve never truly enjoyed the X I miss the home button and also find the screen hard to look at compared to the LCD On other iPhones
Score: 4 Votes (Like | Disagree)

AND if that had happened, then both would be RUNAWAY SUCCESSES ! ...

AND, very-likely the last good iPhones with Touch ID and the ALL-important Hardware Home Button.

I think I speak for everyone on this forum when I say... “DUDE. Relax. Re. Lax.”

ANYWAYY... the phone looks awesome. People have been waiting forever for the black and red combo. I’m happy with my X though :)
Score: 3 Votes (Like | Disagree)

Superhappytree
Received mine this morning. The Red is deeper than I expected, it’s like a Ferrari Red like others were saying although it looked brighter in the pics I saw. Either way, this is one attractive phone!
Score: 3 Votes (Like | Disagree)

Why no X? And why don't they offer it at launch? Cut into launch profits? Able to absorb donations because of increased margins?

I wish it would be a launch product instead of coming up to end of cycle in a good few months
Score: 2 Votes (Like | Disagree)

now i see it
If Apple makes a green one are we going to do this all over again? World wide News Flash. Media updates, reviews, unboxings, forum threads, YouTube video comparisons-
The Apple hype machine is running full bore over adding some #ff0000 powder into the anodizing vat.
Score: 1 Votes (Like | Disagree)
Read All Comments