As promised, special (PRODUCT)RED editions of the iPhone 8 and iPhone 8 Plus unveiled yesterday are now available to order on Apple.com and through the Apple Store app on iPhone and iPad in the United States and several other countries. 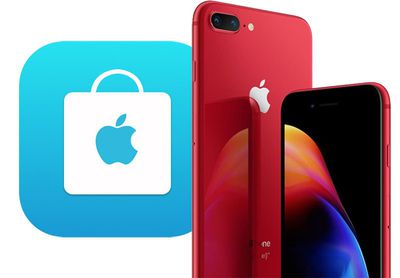 The new models are available with 64GB or 256GB storage for the same prices as the equivalent iPhone 8 and iPhone 8 Plus models in Apple's standard space gray, silver, and gold colorways, which remain available.

Apple's new (PRODUCT)RED edition iPhone X Leather Folio is also available to purchase for $99 starting today from Apple.com, Apple Stores, and the Apple Store app in dozens of countries around the world.

The products are part of Apple's 11-year partnership with (RED), founded in 2006 by U2 frontman Bono and activist Bobby Shriver. The brand and its licensed red-colored products helps to raise funds for The Global Fund, which helps people affected by HIV or AIDS, tuberculosis, and malaria in eight African countries.

For each (RED) product sold, Apple makes a contribution to The Global Fund, raising over $160 million to date.

Just like people afraid of "bluetooth” effects on health. Again, not tryint to offend you at all, but Apple is not going to change their pipeline and put back touch id. Face ID is the future, and I seriously doubt Apple would have released it without sufficient research on it.

Well if I could see the links to the research they did that would be great. I have seen preliminary research indicating there can be eye damage from some exposure to IR beams, but they didn’t study effects of the kinds and strengths of the light in this particular application for biometric authentication in cell phones. Nor what happens over the course of frequent exposure.

My husband and I and a few other forum members have already experienced cumulative progressive severe eye pain from iris scanners in smart phones. I do think Apple has a smarter implementation than the iris scanner we used, but right now with no published data to consult, I don’t care to trust the gift of eyesight to this particular application of LED laser technology. My husband is fine with it, that’s his choice as an adult. The kids are a different matter.

Already, Apple’s particular presentation of OLED has landed some forum members in the ER or their doctor’s office with severe migraines, despite their never having experienced migraines. This type of OLED has been used before. Yet Apple didn’t seem to anticipate this effect on some of its customers.

So I don’t blindly trust any company, not even Apple, to look after my or my family’s health and safety. The CPSC site is filled with recalls due to reports of death and injury to customers from products that had been successfully marketed for years. Like the crib I used for my own baby.
Score: 9 Votes (Like | Disagree)

If I want to buy the X Plus, which I may very well want to do, I'll just sell this one and buy it. No big deal.
Score: 6 Votes (Like | Disagree)

Because there is no definitive answer from ophthalmologists on whether the Face ID projector tech is safe for the eyes of my kids. Or us adults for that matter. Insufficient data.

So not every single person who likes iPhones is sold on this roadmap for the iPhone’s future, especially if they’re looking for a phone for their teenagers or even younger kids. I’m hoping by the time our 8’s need to be replaced some studies will have been done on this specific application of this specific light emitter and we will know more. Or Apple will come to their senses and include Touch ID back in.

I like the fingerprint sensor too much to switch yet, I use it for everything, and too many complaints about face id not working with a lot of the apps yet for unlocking and authorization. I just ordered the red 8 plus, I'll keep this one for the two years, pay it off and pass it down to my daughter. By then everything will be face id and implemented across all the apps and platforms. I don't mind waiting for something to be perfected before getting it.
Score: 4 Votes (Like | Disagree)

zorinlynx
I wonder if this will be the very last premium iPhone that uses TouchID.

I suspect that people who prefer TouchID and want to delay switching as long as possible will end up buying this phone just for that reason. Hell, I have an iPhone 7 Plus and even I'm tempted.
Score: 4 Votes (Like | Disagree)
Read All Comments

Sunday June 26, 2022 7:36 am PDT by Joe Rossignol
iPhone 14 Pro models are widely expected to feature always-on displays that allow users to view glanceable information without having to tap to wake the screen. In the latest edition of his Power On newsletter for Bloomberg, Mark Gurman said the feature will include support for iOS 16's new Lock screen widgets for weather, fitness, and more. "Like the Apple Watch, the iPhone 14 Pro will be...
Read Full Article • 133 comments