Apple CEO Tim Cook: 'It's Not True That the iPhone is Not Made in the United States'

"It's not true that the iPhone is not made in the United States," Apple CEO Tim Cook said this morning in an interview with Recode's Kara Swisher and MSNBC's Chris Hayes in a response to criticism about its ties to China and other countries.

"We have always made the parts here," Cook said. "People just look at where the final product is assembled." In a global world, he explained, manufacturing and assembly needs to be done in a variety of places. 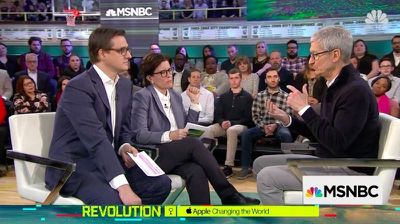 Components manufactured in the U.S. are shipped abroad, with devices assembled by suppliers like Foxconn and Pegatron in China.

Cook said "political pressure" doesn't push Apple to add U.S. jobs, as it's something the company is already doing. As Cook often says, Apple could "only have been created in the United States," and Apple wants to give back. "Businesses should be more than just building revenues and profits," Cook said. "They should be building people."

"We know that Apple could only have been created in the United States. We know that. This company would not have flourished in any other country in the world. We love this country. We are patriots. This is our country and we want to create as many jobs as we can in the U.S. We don't need any political pressure for that."

Apple in January outlined a five-year plan to contribute $350 billion to the U.S. economy through job creation, existing investments and manufacturing, and new investments. Apple has established an Advanced Manufacturing Fund, for example, to invest in U.S. manufacturing. Apple has thus far invested $200 million in Corning and $390 million in Finisar.

On the topic of job creation and automation, Cook said that it's important to "get comfortable" with "the notion that education is lifelong." Jobs, he says, will be "cannibalized over time and replaced by others." Continuously learning is important, which is why Apple puts such a focus on teaching students of all ages to code. "The jobs of tomorrow are heavily software based," he said.

"There's an element of what each of us do, which will be automated over time. That's not bad. But we need to think about training for the jobs for tomorrow, which will be software-based."

He said he does not believe the narrative around "doom and gloom" is correct, but he does believe government and businesses need to work together on job retraining and creation for industries that are being automated. "We should not all sit around waiting for government to tell us what to do," he said.

Tim Cook's full interview will air on MSNBC on Friday, April 6 at 5:00 p.m. in a segment titled "Revolution: Apple Changing the World."

Glideslope
2018 Hypocrite of the Year just given to Timmy. Obviously lobbying for China. He is scared to death. Too bad. :apple:
Score: 38 Votes (Like | Disagree)

asdavis10
He does have a point. The assembly is what people focus the most on. But when you look at the scale and economics of manufacturing in emerging markets, you simply can't avoid them and still have your products sell at reasonable prices.

If countries start creating protectionist policies to force companies to manufacture locally, then you'll just see that increased cost passed on to the consumer. But the company won't absorb those higher costs.
Score: 27 Votes (Like | Disagree)

555gallardo
Sooo.... apparently, Apple is about to announce acquisition of China and claims it'll be a part of States?
Score: 26 Votes (Like | Disagree)

I7guy
The more Tim gets into the public eye, the more I like his style and way of thinking and how Apple is now being managed.
Score: 26 Votes (Like | Disagree)

itsmilo
American patriotism is always mind boggling to me
Score: 22 Votes (Like | Disagree)

He does have a point. The assembly is what people focus the most on. But when you look at the scale and economics of manufacturing in emerging markets, you simply can't avoid them and still have your products sell at reasonable prices.

If countries start creating protectionist policies to force companies to manufacture locally, then you'll just see that increased cost passed on to the consumer. But the company won't absorb those higher costs.

But that begs the question... Isn't that what an item should cost? Like the avocado debacle a few months ago; if the real price of an "All-American avocado" grown and picked by someone who makes $15.00/hr is 10 bucks, then maybe that's just what it should have been all along.

Face it folks, you can't demand companies to make things completely in the U.S., pay their workers a minimum of $15.00/hr, have the government provide everyone with complete healthcare, and then pay $150 for an iPhone or $50 for a new TV. You have to pick your poison.
Score: 20 Votes (Like | Disagree)
Read All Comments