Following the announcement and launch of Apple's new 9.7-inch iPad, a few websites have gotten hands-on time with the tablet and shared their thoughts online this afternoon. The initial consensus appears to be that while the iPad isn't very surprising in terms of form factor and features, it's a solid entry-level model that benefits from added Apple Pencil support.

Engadget said the new iPad is "as fluid and fast as the iPad Pro," which it described as an "impressive feat." The site said the iPad has a great screen, although it isn't as sharp as the iPad Pro's display. Engadget also pointed out the air gap between the display and cover glass on the new tablet, and its lack of the higher-end iPad Pro's True Tone color correction feature and 120Hz ProMotion refresh rate. 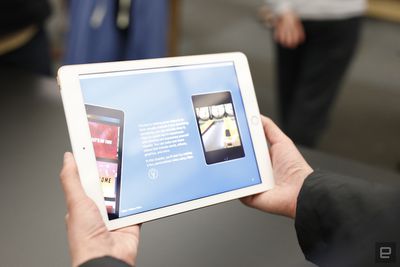 Following today's education-focused presentation in Chicago, we got a chance to pick up the new tablet for ourselves and, well, it's just about the same as last year's model. That's not a bad thing -- it still feels as solid and well-built as ever. The biggest change is Apple Pencil support, and after a brief test it feels almost as fluid and fast as the iPad Pro, which is an impressive feat.

The Verge began its hands-on coverage by stating the new iPad is "very familiar," with all of the expected screen size, bezels, Touch ID sensor, button placement, and cameras users have come to expect from Apple's tablet line. The Verge said the display was "vibrant and responsive," and the site got to mess around with an AR demo, which was "as good as any AR demo" it has seen.

Image via The Verge
The Verge also pointed out that Apple's demo area was not really "focused on the hardware," but instead software demos that showed real-world use in the classroom, with Tim Cook walking around and discussing the new announcement with reporters.


We just spent some time with Apple’s new $329 iPad, announced here in Chicago at its education event. It’s... an iPad. Holding and using an iPad, it feels very much like an iPad! The air gap on the screen is the same as before — large by iPad Pro standards, but only iPad Pro people will really turn their nose up at it. Same goes for the screen overall, which doesn’t have all the True Tone magic of the Pro, but is nevertheless vibrant and responsive.

I checked out a quick demo of an AR classroom app and was as good as any AR demo I’ve seen. Not knock-your-socks-off good, but it didn’t lag and the baby elephant stayed put right on the table where it was placed. Obviously we’ll need to spend more time to say for sure, but the A10 Fusion processor certainly seems up to most tasks.

Besides the new iPad, Apple today announced that its Classroom app will be coming to Mac this June, revealed a new "Schoolwork" app, showed off iWork updates for iOS, and more. New accessories and devices have also emerged on Apple.com following the Field Trip keynote, including standalone Space Gray color options for the Magic Keyboard, Magic Mouse 2, and Magic Trackpad 2.

kingofwale
" Holding and using an iPad, it feels very much like an iPad!"

an iPad feels and uses like an iPad??? some quality journalism right there Verge
Score: 22 Votes (Like | Disagree)

macmanmass
Same old, same old. Only Apple would hold an event for lowering the price of an iPad. Other businesses do that all the time. Its called a discount. Ugh I miss Steve.
Score: 13 Votes (Like | Disagree)

roncron
Seems like this new budget iPad with Apple Pencil support and A10 processor will cannibalize sales of iPad Pros. Sure, the Pro has a better display and a few other advantages, but the features and usability gap between the budget iPad and the Pro have just shrunk substantially, while the price gap has not.

Hopefully (for Apple's sake) a new iPad Pro will be introduced in June that will have enough new features to justify the price differential between it and this new Apple Pencil supporting budget iPad.
Score: 10 Votes (Like | Disagree)

Altis
The lack of laminated screen will make the pencil feel considerably more disconnected than the Pro.

The lack of laminated screen will make the pencil feel considerably more disconnected than the Pro.

lol . Price is all that matters for education.
Score: 8 Votes (Like | Disagree)

Same old, same old. Only Apple would hold an event for lowering the price of an iPad. Other businesses do that all the time. Its called a discount. Ugh I miss Steve.

the ipad is such a boring product.
Score: 6 Votes (Like | Disagree)
Read All Comments

Friday December 2, 2022 10:54 am PST by Juli Clover
Google is continuing on with its attempt to convince Apple to adopt the RCS messaging standard, publishing a new "it's time for RCS" blog post. Promoted heavily by Google, RCS or Rich Communication Services is a messaging standard that is designed to replace the current SMS messaging standard. It provides support for higher resolution photos and videos, audio messages, and bigger file sizes, ...
Read Full Article • 624 comments

Monday December 5, 2022 11:44 am PST by Juli Clover
Due to production issues at Apple supplier factories in China, the iPhone 14 Pro and iPhone 14 Pro Max are backordered and basically out of stock at every store. If you were planning to gift or receive an iPhone 14 Pro model for the holidays and didn't already get one, you're basically out of luck because they're gone until late December. Subscribe to the MacRumors YouTube channel for more ...
Read Full Article • 157 comments