Apple today announced an all-new 9.7-inch iPad, describing the tablet as its "most affordable iPad" yet and confirming it will work with the Apple Pencil. Apple said that the device was designed for powerful AR apps.

The tablet has a 9.7-inch Retina display that features a higher-resolution touch sensor to enable support for Apple Pencil, previously only compatible with iPad Pro. Apple Pencil provides a "fluid and natural" drawing experience with sensors that measure pressure and tilt so that users can take notes or illustrate in various apps. 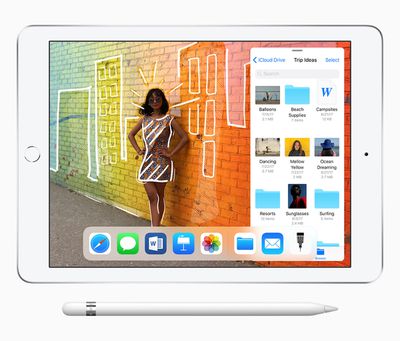 The new iPad has an A10 Fusion chip with 64-bit desktop-class architecture, providing 40 percent faster CPU and 50 percent faster graphics performance when compared to the previous generation 9.7-inch iPad. Apple said that both front and rear cameras provide HD video recording for everything from document scanning to FaceTime calls.

One of the main applications aimed at the new iPad is augmented reality, fueled by the device's Retina display, powerful chip, enhanced cameras, and advanced sensors with a gyroscope and accelerometer. The tablet was built for mobility and durability for students, sporting an aluminum unibody construction.


The 32GB iPad with Wi-Fi is priced at $329 in the U.S. and $459 for the Wi-Fi + Cellular model, and Apple Pencil can be purchased separately for $99. Schools will be able to buy iPad for $299 and Apple Pencil for $89. The new iPad is available to order beginning today and will arrive in stores later this week in more than 25 countries, listed below:

A new iPad mini would be better for schools

Che Castro
A new iPad mini would be better for schools
Score: 25 Votes (Like | Disagree)

NikeSG
They continue to miss the mark. Why is there no Apple smart keyboard. Teachers and students have made it clear that typing directly on the screen is a no-go for students. Yes, there are third party Bluetooth solutions, but it’s one of those “your mileage may vary” situations. How could you not have this standardized? The stinginess knows no end. Yes, it may cannibalize iPad Pro sales, but then again, you’ve also got another $170 tied up on the purchase of the Smart Keyboard. It’s clear that they want the market, but schools won’t be converting to these iPads. Not aggressive enough.
Score: 22 Votes (Like | Disagree)

eyeseeyou
I’d argue that, as a student, being able to use and attach an Apple Smart Keyboard with an iPad is a lot more useful than support for an Apple Pencil which isn’t even included in the still premium price of a lower end iPad.

That being said, even though we have mostly Apple products, my teenager’s 2 year old asus Chromebook still does everything she needs it to do and has 0 support for any type of stylus AND costs less than $300 brand new.

Is this specifically for graphic design schools?
Score: 21 Votes (Like | Disagree)
Read All Comments