According to Joswiak, with developers now able to bring full multiplayer console-style experiences to iOS devices, like the recently released Fortnite and PUBG mobile games, mobile gaming is at a tipping point. Platforms like iOS are able to offer unique combinations of hardware and software that see regular updates and improvements, which has led to impressive new gaming technology over the course of the last few years.

"Every year we are able to amp up the tech that we bring to developers," he says, comparing it to the 4-5 year cycle in console gaming hardware. "Before the industry knew it, we were blowing people away [with the tech]. The full gameplay of these titles has woken a lot of people up."

Joswiak says Apple is able to bring a "very homogenous customer base to developers" with 90 percent of devices running the current version of iOS, which allows developers to introduce new features and target the capabilities of new devices more quickly than on other platforms like Android, giving Apple's App Store a competitive edge.


Ryan Cash, one of the developers behind the newly released Alto's Odyssey game, told TechCrunch that there's a "real and continually growing sense that mobile is a platform to launch compelling, artful experiences."

"This has always been the sentiment among the really amazing community of developers we've been lucky enough to meet. What's most exciting to me, now, though, is hearing this acknowledged by representatives of major console platforms. Having conversations with people about their favorite games from the past year, and seeing that many of them are titles tailor-made for mobile platforms, is really gratifying.

According to Joswiak, gaming has always been one of the App Store's most popular categories, and the iOS 11 redesign of the App Store that splits gaming into its own category has grown interest in mobile gaming even more. "Traffic to the App Store is up significantly, and with higher traffic, of course, comes higher sales."

One aspect of the new App Store design that developers are appreciative of is the new "Today" tab that provides customers with a look at some of the work that goes into creating a mobile game. 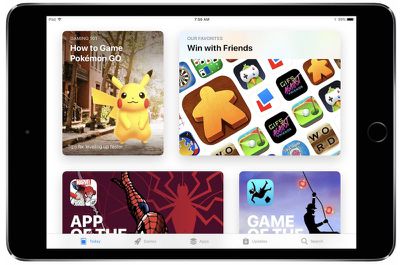 Dan Gray, one of the developers behind Monument Valley 2, said that it lets people know that indie games really are a "labour of love for a small group of people" and not created by a corporation of 200 people. "Hopefully this leads to players seeing the value in paying up front for games in the future once they can see the craft that goes into something," he said.


SpellTower creator Zach Gage told TechCrunch that games have "never had the cultural reach that they do now" because of the App Store and "these magical devices that are in everyones pockets." He went on to say that people are beginning to recognize that "iOS devices are everywhere" and are "the primary computers of many people," which is leading to more iOS development.

The full interview with comments from Joswiak and several other game developers is over at TechCrunch and is well worth reading for those interested mobile gaming.

CrazyForApple
I don't even bother with mobile games anymore. They monetized them into oblivion. It's quite sad actually.
Score: 29 Votes (Like | Disagree)

Saipher
Apple, could you please turn the Apple TV into a full-fledged gaming console just as capable as a PS4 or Xbox?
Thank you!
Score: 19 Votes (Like | Disagree)

DNichter
iOS is the only place to be for developers.
Score: 9 Votes (Like | Disagree)

BritishApple
Nope, sorry Greg but Apple dropped the ball on gaming. Yes, Fortnite is very good (on iPhone X is very close to the Xbox One build) but shipped without controller support yet shipped with crossplay (touch screen vs controller vs mouse and keyboard).

Mobile gamers are cheap, we see it on Touch Arcade and have done for years; “That’s too expensive” or “I’ll be wait on the sale (for a £4.99 game)”.

Mobile gamers expect free or dirt cheap and have bred a mentality in mobile gaming that led to ridiculous IAP (Real Racing 3 is a disgrace and continues to be even now) and F2P models.

Until developers target the horsepower of Apple’s devices and target REAL gamers who want to pay top dollar for great games, then mobile gaming will never go anywhere. The Candy Crush generation are here to stay.
Score: 9 Votes (Like | Disagree)

WinstonRumfoord
I can't get on board with the touch screen controls, far too finicky and inaccurate for any of the kinds of games I enjoy playing.
Score: 8 Votes (Like | Disagree)

Apple, could you please turn the Apple TV into a full-fledged gaming console just as capable as a PS4 or Xbox?
Thank you!

With an iPhone as a controller. It’s already more sophisticated than any other games console controller. Full touch screen, camera, gyro... friends arrive, sync em up or open an app. With some decent thinking you’ll have so much scope for games without needing anything beyond the “hub”/Apple TV to host it.

If they did that and properly committed to it with some great developers & games, I honestly believe they’d rival or even conquer Nintendo for casual home gaming.
Score: 7 Votes (Like | Disagree)
Read All Comments