Apple today released the third public beta of an upcoming iOS 11.3 update for its public beta testing group, one day after seeding the third beta to developers and two weeks after releasing the second public beta.

Beta testers who are members of Apple's beta testing program will receive the new iOS 11.3 beta update over-the-air after installing the proper certificate on an iOS device.

Subscribe to the MacRumors YouTube channel for more videos.
The third betas of iOS 11.3 and tvOS 11.3 remove AirPlay 2 features that were present in earlier betas. Prior to today's update, AirPlay 2 functionality allowed the Apple TV to be added to the Home app on an iOS device, and it enabled multi-room audio playback across multiple Apple TVs. These features are no longer available and it is not clear if they will be re-enabled in a later beta ahead of the launch of iOS 11.3.

iOS 11.3 is a significant update that introduces multiple new features like Messages on iCloud for storing your iMessages in iCloud, and ARKit 1.5, a new, upgraded version of ARKit that can more accurately map irregularly shaped surfaces, detect images, and recognize and place virtual objects on vertical surfaces like walls.

Four new Animoji (lion, skull, dragon, and bear) are available for the iPhone X, the Health app has a new Health Records feature where you can store your medical records, and as of iOS 11.3 beta 2, the update includes a new "Battery Health" option that's designed to provide iOS users with more information about their batteries. 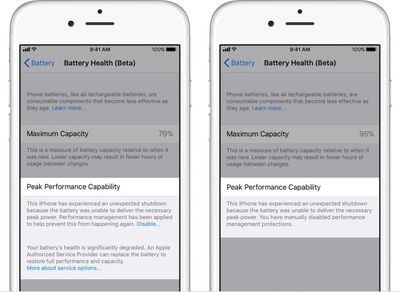 Other new features in iOS 11.3 include an Apple News "For You" section that displays the top videos of the day, info on version and download size for app updates in the Purchased tab of the App Store, Advanced Mobile Location (AML) for sharing more accurate location data when placing an emergency call in a supported country, and a new Privacy icon that will show up whenever Apple asks you for info. iBooks has also had the "i" removed from its name, so it's just "Books" now, and in the App Store, you can sort app reviews by rating and date for the first time.

Business Chat, which will let you interface with businesses like Wells Fargo, Delta, Hilton and Lowe's right in the Messages app is coming when iOS 11.3 is released, and improvements to Apple Music will bring better support for music videos.

Apple says iOS 11.3 will be released to the public in the spring.

Going out on a limb: Guessing it is because this is MacRumors and not cable access news. Know what I do when I stumble upon a story I'm not interested in? Don't click to open it.
Score: 27 Votes (Like | Disagree)

Feel free to try this out; one of the default words it blocks is "beta": [GUIDE] Removing Unwanted Articles From Front Page ('https://forums.macrumors.com/threads/guide-removing-unwanted-articles-from-front-page.2060549/')

Because many of us read them regularly, gauging when it might be appropriate to download the beta onto our phones based on the feedback of others.

No thread, no easily accessible feedback.

X--X
Why is there a seperate article about every freaking new beta version?
Score: 10 Votes (Like | Disagree)

No matter what MacRumors chooses to do, someone will be unhappy. I'm sure someone would complain if MacRumors did not post an article when a new beta came out.

In any case - it's not as if they're posting a new article every few seconds.
Score: 9 Votes (Like | Disagree)

There is NO such thing as an unexpected shutdown. It is software telling the device to shutdown. The battery has twice the voltage needed to keep the CPU happy. It voltage sag is really a problem, it sounds like apple skimped on capacitors.

Huh, you are clearly not an engineer.
Score: 8 Votes (Like | Disagree)
Read All Comments

Friday November 25, 2022 2:58 am PST by Sami Fathi
An Apple engineer has addressed the lack of lossless audio support in the second-generation AirPods Pro in a new interview. Current Bluetooth technology in the AirPods lineup means that Apple's audio products do not support Apple Music Lossless audio. Apple has previously hinted that it may develop its own codec and connectivity standard that builds on AirPlay and supports higher quality...
Read Full Article • 179 comments