Subscribe to the MacRumors YouTube channel for more videos.
Located in the Battery section of the Settings app, the new Battery Health feature tells you the maximum capacity of your battery and whether or not it is operating at peak capacity. 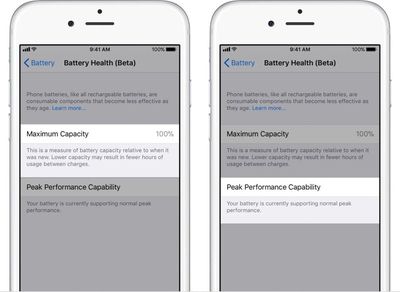 What you'll see if your device is operating normally
On devices that are operating at full battery capacity, such as the newly released iPhone X, there is no toggle to turn off the throttling feature that causes iPhones with degraded batteries to run more slowly. An updated support document that outlines the feature says that on a device with a battery that needs to be replaced, power management can be toggled off.

Additionally, users can see if the performance management feature that dynamically manages maximum performance to prevent unexpected shutdowns is on and can choose to turn it off. This feature is enabled only after an unexpected shutdown first occurs on a device with a battery that has diminished ability to deliver maximum instantaneous power. This feature applies to iPhone 6, iPhone 6 Plus, iPhone 6s, iPhone 6s Plus, iPhone SE, iPhone 7, and iPhone 7 Plus.

Apple says that if power management is manually disabled after being enabled due to a shutdown, it won't be able to be turned back on. It will, however, turn on once again automatically if another unexpected shutdown occurs, so it sounds like users may need to turn the feature off more than once on a device that is experiencing issues.

So hardcore Apple defenders (in other words not true fans), please let us know right now why this wasn't always a feature?

Because Apple didn't want it to be.

gretafour
Should have been in there from the beginning, but better late than never!
Score: 23 Votes (Like | Disagree)

skillwill
Why do people have such unrealistic expectations? You buy a phone knowing (or should know, not anyone else's fault if you don't) what happens to batteries. They get older, they wear out... that's what happens! Then the one company that actually attempts to mitigate these problems by putting a crash-prevention feature into the phone are now the ones having to pay for a problem affecting the whole industry. People who never in a million years would have noticed a difference in speed and power in their phone - other than it naturally slowing down through running older hardware with new software - are now complaining that they've been royally screwed! You haven't been!
Score: 15 Votes (Like | Disagree)

srsub3
hahahahahah don't worry the switch will be out maybe in september after iPhone X-s! or maybe with another extremely helpful feature!
Score: 13 Votes (Like | Disagree)

RealAppleFan
So hardcore Apple defenders (in other words not true fans), please let us know right now why this wasn't always a feature?

So hardcore Apple defenders (in other words not true fans), please let us know right now why this wasn't always a feature?

LOL. This is just too ridiculous to actually respond to. I feel like this person isn't even trolling, they are just demanding a response.
Score: 9 Votes (Like | Disagree)
Read All Comments

Sunday September 25, 2022 6:50 am PDT by Sami Fathi
Apple may decide to release its remaining products for 2022, which include updated iPad Pro, Mac mini, and 14-inch and 16-inch MacBook Pro models, through press releases on its website rather than a digital event, according to Bloomberg's Mark Gurman. In his latest Power On newsletter, Gurman said that Apple is currently "likely to release its remaining 2022 products via press releases,...
Read Full Article • 166 comments