While some construction remains underway at Apple Park on both the inside and outside, an increasing number of Apple employees will likely transition to the company's new headquarters over the next few months. 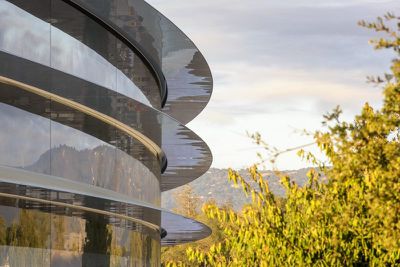 The permits should accelerate the move-in process for some 12,000 employees that will eventually work out of Apple Park, with many coming from the company's nearby Infinite Loop campus, both of which are located in Cupertino, California.

Apple employees have generally remained quiet about the move, in line with the company's secretive culture, but a few mentions have surfaced on social media platforms like Twitter and Snapchat since early January. One employee tweeted that Wednesday was his last day at Apple's previous Infinite Loop headquarters.

Last day at the Loop. It’s always felt surreal to be in these buildings where so much has happened. Next week starts at the new campus, Apple Park, where new history will be made. — Brian (@littlebluebro) January 25, 2018

Apple had already received temporary occupancy permits last year for certain sections of Apple Park that contain the restaurant and atrium. Permits were also granted for the Apple Park Visitor Center and Steve Jobs Theater, where Apple unveiled the iPhone X and will host its annual shareholders meeting next month.

Apple originally said its new headquarters would open last April, but at its September event, chief executive Tim Cook said employees would begin moving in later in the year, beyond some ancillary buildings already in use.

When construction wraps up at Apple Park, the headquarters should be able to receive permanent occupancy permits. For the latest progress update, watch this drone video shared by Duncan Sinfield earlier this month.

mtneer
Well I hope this giant distraction is over. Apple needs to focus on going back to basics once again, not the decor.
Score: 10 Votes (Like | Disagree)

Occupancy permits? That's dumb. I wonder how much the city makes on these permits. That's the only reason why they exist.

It's all part of new construction and making sure the space is safe and meets all codes. Each area has to be signed off by Code Enforcement before anyone can use the space as intended. Standard practice in every type of construction in the U.S. If we didn't have this checkpoint, imagine what kind of conditions we'd have...especially in an earth quake prone area. Seen any news lately of collapsed buildings in "other" countries?? It's there for a reason and all part of the permits process.
[doublepost=1516976811][/doublepost]

Well I hope this giant distraction is over. Apple needs to focus on going back to basics once again, not the decor.

I bet that wavy metal over-hang just grinds on Sir Jony's brain... :) "It's not bloody smooth! Looks like rubbish!"
Score: 7 Votes (Like | Disagree)

HowieIsaacks
Occupancy permits? That's dumb. I wonder how much the city makes on these permits. That's the only reason why they exist.
Score: 4 Votes (Like | Disagree)

Vanilla35
I can't wait for all the great watch band innovation to come!

Just go over to ANDROID! If it is not to your content just switch.
[doublepost=1516979429][/doublepost]i
It's the company DNA not a distraction. Its part of the message they want to deliver

Back to basics would be the Mac not iStuff
Score: 3 Votes (Like | Disagree)

Good question. I'd like to know that as well. Maybe they'll build a second UFO? Ooh, maybe the Death Star?

After all of the jiggering of the current staff around they plan to fill it back up with employees from rented space from other locations.

There is even another building across the street from Apple Part which is in the process of being rehab'ed or torn down. (green fence in lates vid) Apple also owns this property.

Don't forget there is still another large site Apple is taking over Campus 3
Score: 2 Votes (Like | Disagree)
Read All Comments