Apple today announced that 70 colleges and universities across Europe have adopted its "Everyone Can Code" initiative, which aims to help people learn to create mobile apps for the App Store. 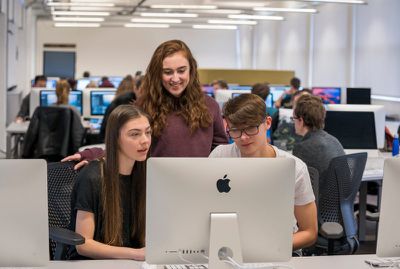 "Coding is an essential skill for today's workforce, and through Everyone Can Code, we're giving people around the world the power to learn, write and teach coding," said Tim Cook, Apple's CEO. "Since launching Everyone Can Code two years ago, we've seen growing excitement for the initiative from schools around the world, who are increasingly incorporating the curriculum into their classrooms."

Institutions highlighted in Apple's press release include: the Technical University of Munich in Germany, which uses Swift and ARKit to teach business skills that are relevant to the local workplace; the publicly funded Mercantec Vocational College in Denmark, which will offer the course to its 3,000 students; and the Hogeschool van Arnhem en Nijmegen in the Netherlands, where 34,000 students will be offered the chance to learn to code. The U.K.'s Harlow College will also offer the course to its 3,000 students, some of which are adults seeking to regain employment.

"At Harlow College, we recognize that learning to code will help students prepare for a technological future. It develops their approach to problem solving, logic and reasoning, as well as reinforcing key mathematical skills," said Karen Spencer, Principal of Harlow College. "Everyone Can Code demonstrates how any student can code by providing a unique and innovative environment for learning."

Apple introduced its App Development with Swift curriculum in early 2017, with the materials available as a free download from the iBooks Store. At the time the initiative was introduced, six community college systems serving 500,000 students across the United States agreed to offer the Apple-designed course. Later in the year, the course expanded to 30 more community college systems in the U.S. before becoming available internationally.

Piggie
The flaw is in the name:

Reminds me of some people I've known, their only computing skills is being able to use some aspects of Microsoft Office, and they think they know all about computers.

This is like the modern day thinking of "everyone is a winner" in schools. No one loses you're all the same and just as good.
Sounds great, but sorry, not the real world.

I've always maintained REAL programmers, have this deep in their blood, it's their thing, their interest, their life.
They'd be messing with computers and code, even if they had a job polishing shoes during the day.

This is like the modern day thinking of "everyone is a winner" in schools. No one loses you're all the same and just as good.
Sounds great, but sorry, not the real world.

I've always maintained REAL programmers, have this deep in their blood, it's their thing, their interest, their life.

Clearly, the subtext here is that everyone who's interested in coding and feel like it's their thing and it may be their life, can give a shot to coding with Apple's classes.
Score: 10 Votes (Like | Disagree)

ChrisCW11
Lol, "Everyone can code", except the people implementing security login boxes at Apple. Apple needs this program more than ever.
Score: 7 Votes (Like | Disagree)

g75d3
Taking into account recent flood of bugs not everyone can code at Apple.
Score: 5 Votes (Like | Disagree)

Especially when Apple has a complete Stranglehold on App Discovery !
Score: 4 Votes (Like | Disagree)

otternonsense
Maybe Apple's software engineers can take up these courses too? Seeing how consistently screwed iOS and macOS has been in the past couple of years (reaching a fever pitch of mediocrity with iOS 11 and the macOS security blunders).

Clearly, the subtext here is that everyone who's interested in coding and feel like it's their thing and it may be their life, can give a shot to coding with Apple's classes.

It's not that clear from the context.
Score: 4 Votes (Like | Disagree)
Read All Comments