Apple today announced that its App Development with Swift curriculum will now be offered in more than 30 leading community college systems across the United States in the 2017-2018 school year. 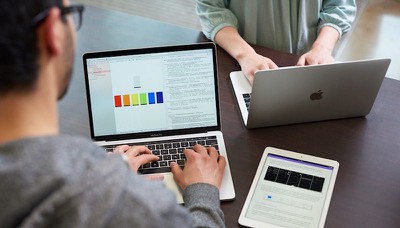 The full-year course, available for free on the iBooks store, teaches students how to build apps using Apple's open source programming language Swift. Apple says the course takes students with no programming experience and enables them to build fully-functional apps of their own design.

“We’ve seen firsthand how Apple’s app ecosystem has transformed the global economy, creating entire new industries and supporting millions of jobs,” said Tim Cook, Apple’s CEO. “We believe passionately that same opportunity should be extended to everyone, and community colleges have a powerful reach into communities where education becomes the great equalizer.”

“We’re thrilled to have Apple join our mission to make Austin more affordable for people who already live in the city,” said Austin Mayor Steve Adler. “Apple is going to be a force multiplier in the community’s ongoing efforts to lift 10,000 out of poverty and into good jobs over the next five years.”

They make it sound way to easy. Some people’s brains are wired for coding but a lot are not. If you’re someone who didn’t/doesn’t excel at math in school I think learning to code will be more difficult. I don’t think anyone can code.

Programming is basically using the pattern recognition capacity of our brains.

Which is something anybody can do.

Of course some people can’t learn to program, can’t learn anything because it’s easier to turn off their brains and watch junk TV all day.
Score: 5 Votes (Like | Disagree)

They make it sound way to easy. Some people’s brains are wired for coding but a lot are not. If you’re someone who didn’t/doesn’t excel at math in school I think learning to code will be more difficult. I don’t think anyone can code.

I agree that not everyone can "get" coding, but there are TONS of people who are great at it, and have been successful, and haven't done math beyond high school basics. I know plenty myself. I have talked to people who are doing MSCS degrees, even at like GT, who say the degrees and crazy math are definitely not needed to code.
Score: 4 Votes (Like | Disagree)

jonnysods
Man I hope they still push teaching trades to people. So many trades colleges have closed us around here. Cant put plumbing or electrical in a building using swift!
Score: 4 Votes (Like | Disagree)

69650
I've never written any code before but Swift looks fun so I'm going to have a go and create my own app.
Score: 3 Votes (Like | Disagree)

sledgehammer89
... and we are thrilled to announce Xcode for iPad.
Score: 3 Votes (Like | Disagree)
Read All Comments