Tuesday January 16, 2018 3:59 pm PST by Juli Clover
A new feature that allows Siri to provide audio-based news updates appears to be rolling out to iOS users, allowing iPhone and iPad users to get audio news updates via the Podcasts app when asking Siri for current news info. 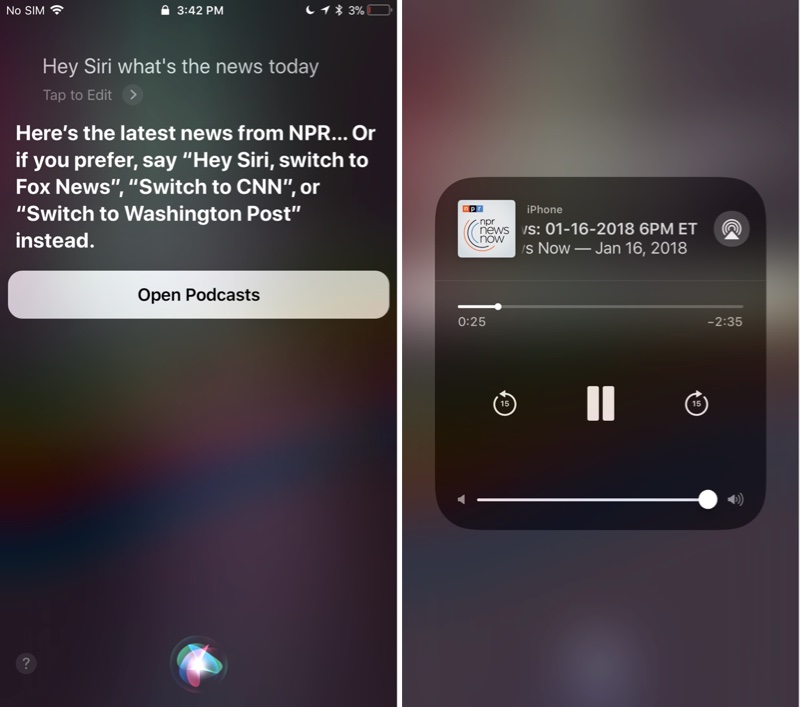 When you ask Siri about the news of the day via Hey Siri or another hands-free method, the personal assistant will provide Podcast news from NPR by default in the United States. You can, however, ask Siri to switch to news from Fox News, CNN, or The Washington Post.

In other countries, local news podcasts will be played instead. In the UK, for example, Siri will offer up audio news from BBC, Sky News, or LBC.

The audio news feature, which appears to have been developed primarily for Apple's upcoming HomePod speaker, is invoked when using "Hey Siri" or asking Siri about the news when using CarPlay or headphones. It's essentially designed for situations where you're not looking at your iPhone or iPad's display.

If you activate Siri using the Side or Home button of a device and ask about the news, Siri will instead provide standard text-based news headlines instead of audio news.

The Siri podcast news feature appears to be available on devices running iOS 11 at least as of today, and in our testing, it is confirmed to be working in the United States and the UK.

mtneer
How about getting Siri to do some basic things first??
Rating: 13 Votes

swingerofbirch
Only with Apple would this be OS-specific. Devices that can't update to iOS 11 like iPhone 5 and 5c should have no problem playing back a podcast.

I got a $29 Echo Dot at Christmas-time and it has made me less and less impressed with my $849 iPhone 7's Siri functionality. Just today I asked Alexa how much caffeine is in a 12 oz Coke. She knew immediately. Siri did a web search.
Rating: 10 Votes

I have it on good authority that the news source is NPR by default, but can actually be switched to a source of your liking (Fox, perhaps?).

This is classified information, not mentioned in the article anywhere, so don't tell anyone.
Rating: 8 Votes

How about getting Siri to do some basic things first??


"Hey Siri whats the news?"
"Sorry there is no music on news"

"Hey siri whats the news?"
"Sure I can schedule that appointment called appointment"
Rating: 8 Votes

szw-mapple fan
Please charge that poor phone. The 3% battery is giving me anxiety simply by looking at it.
Rating: 8 Votes

BaltimoreMediaBlog
Oh, and not to beat a dead horse, but why not just get news with little data used via the FM radio chips in all the iPhones? Oh never mind. Timmy said they don't exist even though the teardown says they do. They will be another lawsuit eventually now that Samsung is offering FM access to all their smartphone FM chips.

Sorry Timmy, we KNOW they're there! BUSTED! :D
Rating: 5 Votes

mistasopz
God, I wish you could uninstall Siri permanently from all Apple products. And I don't mean disable it or turn it off. I want everything related to Siri burned in holy fire and extirpated so that it doesn't reside in any field of memory or storage space. For those of you that were around in the Windows 98 days, you'll understand when I say that Siri is the "clippy" of voice assistants.
Rating: 3 Votes

radiology
Me: Hey Siri any news from Cupertino about the Macbook Pro and Mac mini?
Siri: cricket's sound...
Rating: 3 Votes

"I dont see Jason in your contacts. Should I look for locations by that name?"
Rating: 3 Votes