Apple today seeded the fifth beta of an upcoming iOS 11.2.5 update to developers and public beta testers, a few days after seeding the fourth beta and releasing iOS 11.2.2, an update designed to mitigate a serious hardware-based vulnerability called "Spectre." 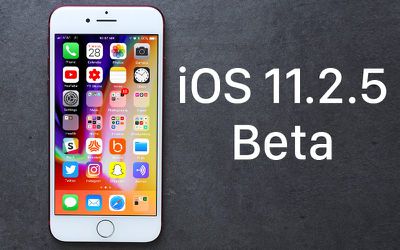 iOS 11.2.5 introduces a new feature that allows Siri to play daily news podcasts when queried about the current news. Siri will offer up news from The Washington Post by default, but you can also choose to switch to Fox News, CNN, or NPR.

The new audio news feature, which appears to have been developed for use with Apple's upcoming HomePod speaker, is invoked when using Hey Siri or asking Siri about the news when using CarPlay or with headphones connected - essentially any situation where you're not looking at the display of an iOS device. If you activate Siri using the side button or Home button of a device, standard Apple news headlines are provided instead of the audio-based news highlights.

It's not clear what other new features, if any, will be included in the iOS 11.2.5 beta. We didn't discover other noticeable outward-facing changes in the first four iOS 11.2.5 betas, so it's possible this update focuses mainly on bug fixes and security improvements aside from the Siri news update.

If that's the case, we may not know the extent of what's in the update until it sees a public release.

Apple is supposed to be releasing an iCloud Messages feature that was pulled from the iOS 11 release, but there has been no indication of when we can expect iCloud Messages to be reintroduced. Should new features be discovered in the fifth beta of iOS 11.2.5, we'll update this post.

tipoo
There's lots of improvements over time, but in none of these betas am I seeing iOS11's chopping framerate cleaned up (yes I did restore as new again). On a half year old iPhone 7. It's what I initially liked about iOS, and it seems they've had issues with it ever since Forstall left and Ive took over iOS design.

Honestly if iOS12 did nothing but make the UI a near perfect 60fps (or 120) again and really really buff out all the bugs and polish all the things and maximize performance, I'd be happy.
Score: 8 Votes (Like | Disagree)

My iPhone 7 Plus wants to have some words with you. It's been nothing but smooth on every iOS 11 release since iOS 11.1. So I honestly think it's just your X. You must've did something to mess with it, because I have several friends who own the X, and they haven't had any issues with regards to performance or anything.
Score: 7 Votes (Like | Disagree)

Mtmspa
First thing I will change is the news source.
Score: 6 Votes (Like | Disagree)

lunarworks
"Siri will offer up news from The Washington Post by default..."