In a blog post on the Procon-SP website, the agency says that it sent a notice to Apple on Wednesday demanding information on how iPhone customers can replace their batteries, what models are included in the action, how long replacements will be available for, and the cost in Brazil. 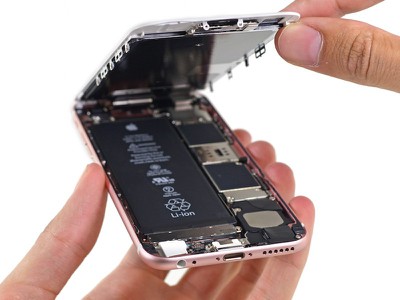 Image via iFixit
Procon-SP attempted to deliver a notice to Apple this morning, which Apple refused to sign, but the demand for information was left at the front desk and the agency is giving Apple 10 days to respond.

It is not clear what will happen if Apple does not provide the info, but Reuters says Procon-SP has the power to levy fines or propose legal action against Apple.

Apple first announced plans to begin offering reduced-cost battery replacements in late December to provide a fix for customers who have noticed their iPhones slowing down due to power management features impacting older devices with degraded batteries.

Customers in need of a battery replacement should contact Apple's support staff in their country to initiate the replacement process. Reduced cost batteries will be available through the end of 2018.

RealAppleFan
Apple deserves the backlash; this was the final straw:

1. Removed headphone jack
2. Removed usb a from macbook pro
3. Notch
4. Rare iMac updates; no Mac Pro trash can update
5. Intentionally slowing down iPhones, and would have kept doing it secretly if they didn't get caught

"Real Apple Fan" (who is a newbie) and trying to steer Apple folks away from Apple. Hmm....

As opposed to a die-hard apple fan who can't ever see Apple doing anything wrong like you
Score: 15 Votes (Like | Disagree)

jdillings
Another sterling example of Cook's leadership...penny pinching whenever possible.

I am surprised the EU hasnt said anything. I guess they are too busy making Döner Kebab and „too dark“ fried french fries illegal

Seoras
It's a fair question. I'm in New Zealand, which has no Apple Stores, and I'd like a new battery replacement for my old iPhone 6Plus my wife is using.
Where/Who do I take it to? How much will it cost? I tried looking on the Apple NZ website but it's useless.
The Apple response, and offer, only covers the USA so far...
Score: 12 Votes (Like | Disagree)

ChazSch
Customers in need of a battery replacement should contact Apple's support staff ('https://support.apple.com/en-us/HT201232') in their country.....

itsmilo
I am surprised the EU hasnt said anything. I guess they are too busy making Döner Kebab and „too dark“ fried french fries illegal
Score: 10 Votes (Like | Disagree)
Read All Comments