Last week, Apple reduced the price of out-of-warranty iPhone battery replacements from $79 to $29, following a wave of controversy over power management features in older iPhones. In a note to customers, Apple said its new policy applied to "anyone with an iPhone 6 or later whose battery needs to be replaced", but failed to specify if this eligibility criteria was dependent on whether a given iPhone failed an official Genius Bar diagnostic test. 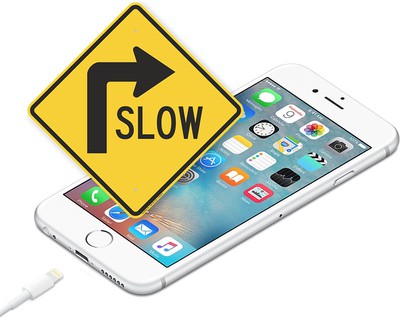 This morning, French tech blog iGeneration reported that an internal Apple Store memo has been circulated which states that if a customer asks for a battery replacement on an iPhone 6 or later, then the Genius Bar should allow it, even if their phone passes Apple's own diagnostic test.

Apple has since independently confirmed to MacRumors that it will agree to replace an eligible battery for a $29 fee, regardless of whether an official diagnostic test shows that it is still able to retain less than 80 percent of its original capacity. The concession appears to have been made to mollify the anger of customers stoked by headlines suggesting that Apple artificially slows down older iPhones to drive customers to upgrade to newer models.

Anecdotal reports also suggest that customers who paid $79 to have their battery replaced before the new pricing came into effect on Saturday, December 30, will receive a refund from Apple upon request. Please let us know of your own experiences in the comments below.

Apple last week was forced to apologize over a lack of transparency regarding its process of dynamically managing the peak performance of some older iPhone models with degraded batteries to prevent unexpected shutdowns. When iOS 10.2.1 was released in February, Apple vaguely referred to "improvements" it had made to reduce occurrences of unexpected shutdowns. It only chose to explain that the changes it made may result in temporary slowdowns on some older iPhone models with degraded batteries after controversy recently reignited.

Apple can run a diagnostic on your phone's battery remotely – you don't need to visit an Apple Store. To initiate the battery diagnostic/replacement process, contact Apple Support by phone, online chat, email, or Twitter. Alternatively, you can schedule a Genius Bar appointment at an Apple Store with the Apple Support app. You can also inquire about a battery replacement with select Apple Authorized Service Providers.

Narcaz
Too little too late. Apple genius denied the iphone 6 (of a family member) the 79$ out of warranty battery replacement back in september and suggested a hardware upgrade instead. I hope the lawsuits will hit them hard.
Score: 74 Votes (Like | Disagree)

pdaholic
It sucks that I'm so balls deep in this ecosystem. Apple is slowly degenerating into a greedy, buggy, laggy mess.
Score: 49 Votes (Like | Disagree)

gatearray
Lying corporate scumbags, look at how they cower now that they've been caught strong-arming their loyal customers out of billions of dollars.
Score: 39 Votes (Like | Disagree)

paross
This should highlight a deeper problem Apple has created.

1. No information given to consumers or anyone who wishes to do third party repairs.
2. Forcing "features" without giving consumers the right to decline. (Maybe I don't want 1.5GB auto downloaded to avoid this very "feature", updates are all but forced on users.)
3. A lack of (until this year) any real transparency from Apple, to the point that it now seems less about letting users participate in culture and more about damage control.
4. Such an intense focus on yearly sales for iOS that quality and innovation have taken a hit.
Score: 28 Votes (Like | Disagree)

Not need to jump. The iPhone 6 passed Apple battery diagnosis test and he said that he won't do a replacement. When we asked about the sluggish performance the genius said that the iphone 6 is old hardware by now and that they have brand new iPhone 8 in the front of the store. I don't want any reparations or whatever from Apple, but the lack of information about the performance reduction is enough for a lawsuit.

And this is exactly why what Apple did was shady.

Some defenders of this throttling by Apple often used the argument that people should be replacing their batteries anyway and it's not Apple's fault they won't replace the battery.

But as you mentioned, Apple employees will suggest you buy a new phone instead of buying a new battery. Apple has led people to believe it's the hardware, not the battery.
Score: 23 Votes (Like | Disagree)
Read All Comments

Friday June 18, 2021 9:41 am PDT by Sami Fathi
After a long wait, YouTube for iOS is officially gaining picture-in-picture support, allowing all users, non-premium and premium subscribers, to close the YouTube app and continue watching their video in a small pop-up window. In a statement to MacRumors, YouTube says that picture-in-picture is currently rolling out to all premium subscribers on iOS and that a larger rollout to all US iOS...
Read Full Article • 170 comments

Saturday June 19, 2021 6:00 am PDT by MacRumors Staff
The Apple news cycle started to move beyond WWDC this week, but that doesn't mean there still wasn't a lot to talk about, led by the official debut of the much-leaked Beats Studio Buds that might give us a hint of what to expect for the second-generation AirPods Pro. With no hardware announcements at WWDC, we also took a look at when we might finally see the long-rumored redesigned MacBook...
Read Full Article • 10 comments

Friday June 18, 2021 9:16 am PDT by Joe Rossignol
Apple this week stopped selling its Magic Keyboard with Numeric Keypad, Magic Mouse 2, and Magic Trackpad 2 accessories for the Mac in a Space Gray color, around three months after discontinuing the iMac Pro, which also came in Space Gray. Last month, Apple listed the Space Gray accessories as available while supplies last, and the company has now removed the product pages from its website...
Read Full Article • 121 comments

Friday June 18, 2021 6:59 am PDT by Sami Fathi
Apple supplier TSMC is preparing to produce 3nm chips in the second half of 2022, and in the coming months, the supplier will begin production of 4nm chips, according to a new report from DigiTimes. Apple had previously booked the initial capacity of TSMC's 4nm chip production for future Macs and more recently ordered TSMC to begin production of the A15 chip for the upcoming iPhone 13,...
Read Full Article • 141 comments