What to Buy With the iTunes Gift Card You Unwrapped Today 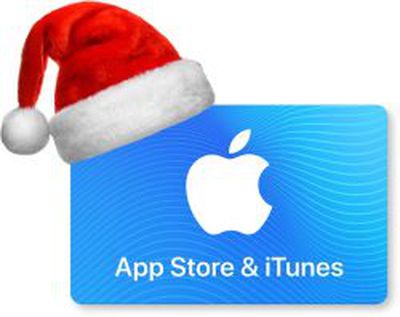 If you show an interest in Apple or technology in general, chances are good that you received at least one iTunes gift card today from a friend or family member today.

Given the card can be used to purchase apps, games, music, movies, TV shows, books, and more, it can be difficult to decide what to buy with your newly acquired funds.

We're here to help with a roundup of ongoing iTunes and App Store sales as well as some other hand-picked recommendations.

In addition to an iTunes sale on select 4K HDR movie bundles, Apple has also discounted a handful of popular holiday movies.


Those looking for a slightly better deal on an annual Apple Music subscription should consider a 12-month Apple Music gift card, which Apple sells for $99. A 12-month subscription to Apple Music normally costs $120 when paying for the service directly with iTunes credit or another form of payment, so you can save $20.

iTunes gift cards can be used to pay for many subscriptions available as in-app purchases, although prices can be higher in the App Store as some companies charge extra to make up for Apple's 30 percent cut of sales.

iTunes gift cards are also valid for purchases on the iBooks Store across iOS and Mac, providing an opportunity to do some reading over the holidays.

- Ready Player One
- A Wrinkle in Time
- Annihilation
- Station Eleven
- It

For magazines, iPhone and iPad users can download the Texture app and subscribe to unlimited access to over 200 of the world's most popular magazines for $6.99 per month as part of an ongoing sale. Magazines can be read on up to five devices per subscription, with the ability to download issues for offline reading.

The latest App Store craze is numbered coloring books in which children colorize pixel art by following a numeric guide. Many of the apps have in-app purchases available to unlock additional pixel art, remove watermarks, and/or remove ads.


For magazines, iPhone and iPad users can download the Texture app ('https://itunes.apple.com/us/app/texture-unlimited-magazines/id533561885?mt=8') and subscribe to unlimited access to over 200 of the world's most popular magazines for $6.99 per month as part of an ongoing sale. Magazines can be read on up to five devices per subscription, with the ability to download issues for offline reading.

Handy tip before anyone goes off spending $ on magazines -- Most U.S. libraries offer free magazine downloads for a bunch of titles via Rbdigital/Zinio. All you need is a library card and you can register via your libraries web site. If you want to read them on your iPhone or iPad you will also need to download the RBdigital app -- though I use the original Zinio app, but think it's because my account is so old.

Also since most local libraries have reciprocity deals with other library systems in the area if you get a card from those libraries you can download the available magazines offered by those systems. In my experience most systems offer the same assortment give or take one or two titles. But, for example, I have a card for the library in the county's next door because they offer Road and Track and my county does not.

The magazines do not need to be "returned" and can be stored on your device as long as you wish.
Score: 4 Votes (Like | Disagree)

TMRJIJ
I’m still waiting on my AirPods though... :confused:

Apple_Robert
Merry Christmas and happy holiday to all in MacRumors land.

Thanks for the informative article, Joe.

Buy yourself a card. That is what I did. :D
Score: 2 Votes (Like | Disagree)
Read All Comments