Apple today launched a new iTunes Movies sale centering around 4K HDR bundles, allowing Apple TV 4K owners to further expand -- or start -- their 4K film collections at a cheaper price. The bundles are divided up by studios and further split into four main genre categories under each studio: Action and Adventure, Comedy, Drama, and Sci-Fi and Fantasy. 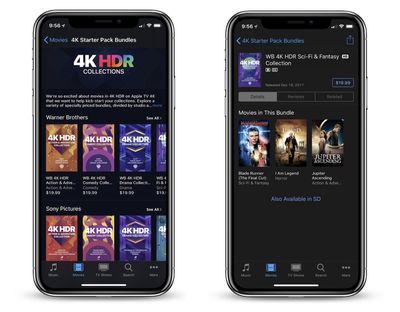 Most of the bundles are $19.99 for three movies, although some rise to $22.99 and $24.99 depending on the studio. For the most part, sale prices haven't hit the SD versions of each collection, with some SD price tags still as much as double the price of the 4K versions of each bundle. Below we've listed each collection and the movies you will find in each:

For the new sale, Apple said: "We're so excited about movies in 4K HDR on Apple TV 4K that we want to help kick-start your collections. Explore a variety of specialty priced bundles,divided by studio and genre, and start building your library in this amazing picture quality today."

iTunes Movies sales are frequent around the holidays, and there are also a few Christmas-themed movies in 4K being discounted right now, like Home Alone, How The Grinch Stole Christmas, and The Holiday ($9.99 each). You can visit iTunes Movies on macOS or iOS and the new 4K HDR collections should start appearing on the store's carousel today.

toomanydatsuns
Yikes. Lots of lemons in those bundles.
Score: 27 Votes (Like | Disagree)

Who and Why do you rent or buy movies nowadays? I'm wondering who re-watches the same movie more than once?

The only movie I watched more than once was Napoleon Dynamite (like 10 times). I'm on netflix, amazon prime video, hbo. What is the appeal to renting or buying movies? Just wondering

Watching movies are fun. Rewatching some of my favorite movies is fun. The nostalgia? The happy feelings a favorite movie can bring? I have a few hundred movies in my iTunes collection and will happily rewatch many of them and will probably watching them all even more in the next few years as my daughter grows up. Me and my wife rewatching The Middle Earth movies pretty much annually. Same with Star Wars. Same with the MCU movies. We have dozens of musicals (old and new) that we enjoy. Plus you get all of the special features with iTunes Extras. Movies are just like music to me. It's easy to rewatch and enjoy.
Score: 9 Votes (Like | Disagree)

Blackstick
I hate the juxtaposition of the movies in these bundles. Just discount each title, damn.
Score: 9 Votes (Like | Disagree)

In the UK we seem to have lots of individual movies at £4.99 rather than this offer.

Tokenfreak
I would buy them if I could actually download and watch them on my 5K iMac.
Score: 7 Votes (Like | Disagree)

It's a shame their all blah movies....except for Blade Runner (but I already got that)

Don't stick your nose too high into the air. You'll get a nosebleed.
Score: 7 Votes (Like | Disagree)
Read All Comments