Apple today began offering Apple Music Student Memberships in 25 additional countries around the world, cutting the cost of an Apple Music subscription by approximately 50 percent for students enrolled in a college or university. The discounts provided to students vary based on country.

Student pricing was already available in the United States, Australia, Denmark, Germany, Ireland, New Zealand, and the United Kingdom following the May 2016 debut of the student program. Student Memberships are now available for Apple Music subscribers in a total of 32 countries. 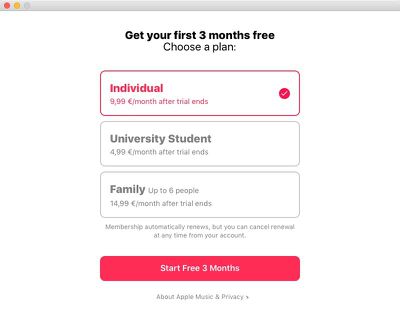 Apple Music student pricing in France
Student Memberships are validated using UNiDAYS, a student validation service. UNiDAYS confirms that Apple Music subscribers are enrolled in a degree-granting college or university before allowing customers to get the discounted subscription price.

Customers who subscribe to Apple Music with a student subscription will need to confirm their status on a regular basis through UNiDAYS. Subscribers who are no longer students or who have had student pricing for 48 months will be switched over to a full price individual Apple Music subscription.

I'll get Google Play Music instead*

*Said no one ever, the only thing people use Google Music is for piracy.

Traverse
I have Spotify Student. I will never use Apple Music because they try too hard to integrate your local and cloud music. I get that that's what most people want buy I prefer this setup:


* iTunes is my master (mostly lossless) library. It's backed up and contains only songs I deem fit (pretentious, but I didn't mean it that way) to be there.
* I use Spotify for music discover and to save albums that I will add to iTunes later. Spotify acts like my database of "to purchase" music. Eventually I'll get the CD or the ALAC files from Bandcamp or Loudr, add it to iTunes and remove it from Spotify.


I like that Spotify is a separate app clearly distinct from my local music. I don't want to burn data listing to what I thought was local, but now is off loaded. Plus I heard hurry stories about their iTunes library getting messed up. And on top of everything else, their music app is just horrid. For me to start using a 3rd party app (Cesium) Apple had to really screw up. All that has pushed me firmly away from Apple Music.

/rant that no one really cared about anyway.
Score: 7 Votes (Like | Disagree)

SteveJobs2.0
Don't see it as an option in Canada yet.
Score: 4 Votes (Like | Disagree)

Ha
Made me laugh how WRONG
I used to go out with a few University intelligent girls in my late teens (engaged to to one, Hi Jo x) and early twenties whose parents had/have houses worth millions now, huge swimming pools - one the size of a very large house!, that was just the pool, Rolls the whole shooting match.

Never judge, I learned at an early age, you could be speaking to a 'secret millionaire'.

I said "tends to". Reading comprehension. Do you have it?

Yes, there's college students with rich parents, but many, many are living on their own for the first time and just trying to scrape by. Or have you never heard of the cliche of getting through college surviving on ramen noodles?
Score: 2 Votes (Like | Disagree)

motulist
Even if they made it 1 dollar a month I still wouldn't get it. I've been with Apple Music since day one, but just this week I finally had enough and switched to Spotify. A year and a half after launch Apple Music is still way too buggy to use reliably. I'm out.
Score: 1 Votes (Like | Disagree)

I graduated college almost 9 years ago but my university lets students keep their email addresses after graduation. Thank god more schools don't do this because it's kept companies complacent on verifying who are actually students and allowed me to get Amazon Prime and Apple Music for half price, plus I keep getting the student discount on Apple products and various other things.

Unethical? Not as far as I'm concerned. If they were really concerned whether or not you're a actually student they'd use something other than a .edu email address to verify you're in school.

Actually I really doubt anyone at Apple care if you get a discount and thy KNOW how anyone can get an .EDU email. All you need to do is APPLY for a school and they give you a .EDU email You need not ever enroll. I'm sure Apple knows this. But the reason of the verification is the RECORD COMPANIES not Apple. Apple had to convince the companies to allow the discount, likely by telling them they would make pull in some people to paid subscriptions who would otherwise just pirate the music. For $5 os not $10 but its s better than zero. You can't make the "5 is more than zero"argument unless you use a speed bump. You don't need a wall, a bump will do.

So why they REALLY want from you is proof that you are pirating music. Being a student is good enough proof and pretending to be a student is an even better proof. So you are the perfect customer, a fake student. They got you to pay $5 when otherwise you'd pay zero.
Score: 1 Votes (Like | Disagree)
Read All Comments