Shazam today updated its iOS app [Direct Link] with a new way to save song snippets when your iPhone or iPad is offline, automatically identifying them once your device is back online. To try out the new feature, place your iOS device into Airplane Mode, open Shazam, tap the central button to start listening for a song that's playing, and then the app will prompt you with a message saying the Shazam has been saved.

Then, when Airplane Mode is deactivated and you open Shazam again, the app will automatically name the song and add it to the "My Shazam" section of the app. The company noted in the version 11.6.0 release notes that it will also send you a notification to let you know that the Shazam is ready when you are back online. 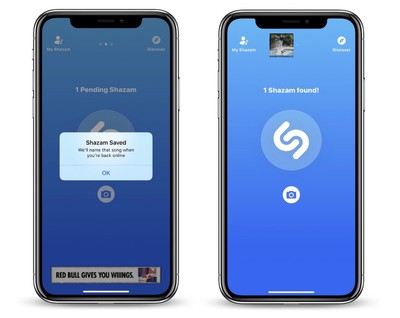 Shazam saves the song offline, then recognizes it and adds it to My Shazam when you're back online

Keep Shazaming, even when you’re offline! Next time the music's on but the WiFi isn't, simply tap the big blue button and we’ll name that song as soon as you're back online. Now we’ll notify you immediately, even it you don’t have the Shazam app open.

Shazam is continuing to be updated following Apple’s announcement last week that it intends to acquire the music recognition company. Although Apple did not disclose financial terms of the acquisition, a source speaking with TechCrunch said the deal could be worth around $400 million. Shazam is already integrated with Apple Music (saving songs you Shazam to a specific playlist) and it also has an iMessage app, so Apple is expected to further bolster its music services with the new acquisition.

SoN1NjA
Wasn't this added a while back ago? It never worked though
Score: 4 Votes (Like | Disagree)

iLoveDeveloping
Wait, I’ve been using this for MONTHS. I don’t think this is new? What are you talking about? I have Shazam (possibly Shazam encore? Hard to tell.). This is NOT a new feature, I’ve been doing this all last summer, it works great!
Score: 3 Votes (Like | Disagree)

thebluepotato
I've been doing this for a few years now when travelling abroad with no data. It just stores all your Shazams until you're back online and open the app. The only thing that could be new, is that it tries to tag them in the background without having to open the app (and hence notifies you that is has finished tagging them).
Score: 2 Votes (Like | Disagree)

jrlcopy
Yeah ... this is an old feature. Smart marketing move though, push out versions advertising a 'new feature' so that they get more users.

Half my apps update once a week mainly for that reason, no real updates but it gets users to open the app.
Score: 2 Votes (Like | Disagree)

At least we'll get rid of the banner ads once the Apple deal goes through. I can see this getting deeper integration into Siri and the Music app on iOS. Would be nice to just be able to Shazam a song without having to yell at Siri over the music "WHAT SONG IS THIS?". Then I presume it'd do something along the lines of add whatever song it was to a playlist in the music app.

Once the deal goes thru, u seriously expect to still have a Shazam app?:rolleyes:
It's already baked into Siri, macOS & iOS, iTunes is gonna swallow that sucka!:D
Score: 1 Votes (Like | Disagree)
Read All Comments

Thursday June 4, 2020 10:07 am PDT by Juli Clover
We still have a few months to go before Apple unveils the iPhone 12, but rumors about the iPhone 13, coming in fall 2021, are already circulating. Japanese site Mac Otakara today shared a rough 3D printed mockup of a 5.5-inch iPhone said to be coming in 2021, which is from "Alibaba sources." The model may be built on leaked specifications and rumors, but where the info comes from is unclear. ...
Read Full Article • 92 comments