The simple game requires players to use their eyebrows to move an emoji face up and down the screen to collect stars, worth one point each, while avoiding other emoji obstacles such as cars, basketballs, and ducks. 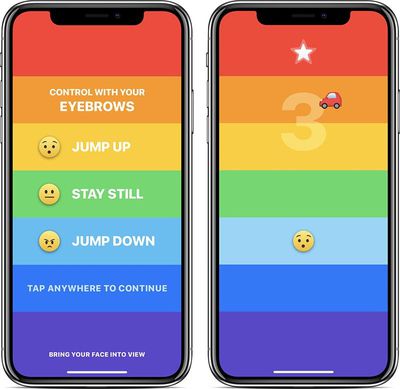 While there are no levels, the game gets increasingly difficult as more obstacles appear. The goal is simply to get the highest score possible, but players can only compete against themselves right now. Gitter told us that he plans to integrate Apple's Game Center for multiplayer competition in a future update.


Rainbrow is a novel concept since it's an early example of a game using ARKit, an iOS 11 framework that can detect the position, topology, and expression of a user's face in real time using the iPhone X's new TrueDepth camera system.

Gitter told us he believes there is a lot of future potential for face-based apps, especially for those that improve accessibility. He pointed us to another face-controlled game that was released earlier this week, Nose Zone, which tasks players with destroying targets by pointing at them with their nose.

Upon first opening Rainbrow, a prompt asks for permission to access the front-facing camera. As with any app, this permission can be toggled on or off at a later time in the Settings app under Privacy > Camera.

Rainbrow is free to download on the App Store for iPhone X. Gitter told us he may add an optional in-app purchase to unlock new emoji characters in the future, but he does not plan on implementing ads into the game.

Updated: Lucky Kat Studios reached out to us after we published this article to alert us about its upcoming game Wacky Face, now available for pre-order on the App Store ahead of its December 20 launch.

This is so dumb. Get back to work Apple.

Apple needs to get back to work because a guy that has absolutely nothing to do with Apple made a game?
Score: 14 Votes (Like | Disagree)

DakotaGuy
The game looks colorful except they messed up and left a chunk of black in the top red bar.
Score: 11 Votes (Like | Disagree)

iReality85
“Is that guy having hemifacial spasms?”

shayneox
Emilia Clarke will smoke everyone on this game
Score: 8 Votes (Like | Disagree)