Apple's marketing chief Phil Schiller believes the iPad Pro can be both a PC replacement and a supplementary device to the Mac. 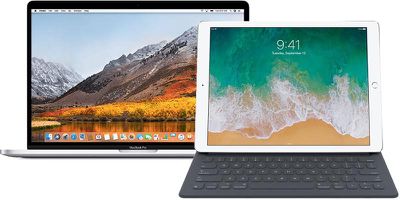 In a wide-ranging interview with T3 about the iPad Pro and other Apple products, including the iPhone X, iMac Pro, HomePod, and AirPods, Schiller said the iPad Pro's exact use case ultimately varies by customer.

What we've learned, truthfully, is that it's both, and that depends on the user. For some people, iPad Pro is a replacement for their computer. Not that you throw away your computer. People don't often do that.

Schiller added that, for many customers, the iPad Pro becomes their primary computing device, especially while traveling.

But that it becomes your primary computing device. The way you mostly hear about this is people say, 'I use a computer at my desk' or 'I use a notebook at my desk, but when I travel, I travel just with my iPad Pro'. It is so great in that situation.

So for those customers, the iPad has become their primary device, but they don't think of it in their brains as competing with their previous computer. It's just the computer they spend the most time with.

Schiller acknowledged that this isn't the case for everyone, as some customers may only use an iPad Pro for certain tasks where a tablet can provide a better experience, such as reading or watching movie and TV shows.

So depending on what those tasks are, for those customers they're augmenting. And what we try to do is not tell the customer that either direction is the right or wrong way. It's almost like they’re making a distinction between the two, even though the uses are overlapping, and one is replacing the other frequently.

Schiller referred to the iPad Pro as a computer on a few occasions, which contrasts with Apple's latest "What's a Computer?" ad for the tablet.


At the end of the video, a mother asks her young daughter "what are you doing on your computer?" and the daughter responds by asking "what's a computer?" to imply that the iPad Pro is not a computer.

While the ad might suggest Apple's increasing focus on the iPad over the Mac, Schiller ensured that the company "cares deeply" about its pro customers. "We love that so much is created on Mac," he said.

To address the needs of those professionals, Apple is launching a powerful iMac Pro this week. The company is also working on a modular Mac Pro that will be accompanied by Apple-branded pro displays.

Interview: Apple's Phil Schiller on How the iPhone X 'Seemed Impossible at the Start'

longofest
The lack of a pointer interface on iPad means that it will never replace a computer for me.
Score: 103 Votes (Like | Disagree)

drewyboy
Yet you can’t develop iOS apps on it...
Score: 96 Votes (Like | Disagree)

If an iPad could replace a computer, you didn't need a computer in the first place.
Score: 68 Votes (Like | Disagree)

vipergts2207
Let me know when iOS allows for multiple users to sign in to a single device. Until then, this is a poor replacement for a computer.
Score: 56 Votes (Like | Disagree)

B4U
Phil, seriously? When I can't even open a webpage like on a computer while I have already requested the desktop site?
Score: 35 Votes (Like | Disagree)

gugy
Sorry Phil, the iPad cannot hold a candle to the Mac. Two total different devices.
While I can do some "work" on the iPad. As a graphics designer the Mac is the king. No discussion there.
Score: 28 Votes (Like | Disagree)
Read All Comments