A Reddit post over the weekend has drawn a flurry of interest after an iPhone 6s owner reported that a battery replacement significantly increased the device's performance running iOS 11. The ensuing discussion thread, also picked up by readers in the MacRumors forum, has led to speculation that Apple intentionally slows down older phones to retain a full day's charge if the battery has degraded over time.

According to TeckFire, the author of the original Reddit post, their iPhone had been very slow after updating to iOS 11, especially compared to their brother's iPhone 6 Plus, so they decided to do some research with GeekBench and battery life apps, and ended up replacing the battery. 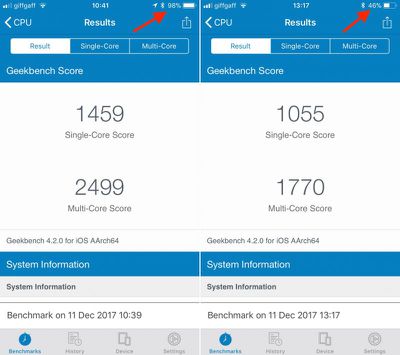 MacRumors' Geekbench scores for iPhone 6s before and after battery drain

Wear level was somewhere around 20% on my old battery. I did a Geekbench score, and found I was getting 1466 Single and 2512 Multi. This did not change wether I had low power mode on or off. After changing my battery, I did another test to check if it was just a placebo. Nope. 2526 Single and 4456 Multi. From what I can tell, Apple slows down phones when their battery gets too low, so you can still have a full days charge.

Just over a year ago, Apple launched a repair program for iPhone 6s owners after some users reported their devices were unexpectedly shutting down. Apple said the problem was down to a manufacturing issue affecting a "very small" number of iPhone 6s devices, and offered battery replacements free of charge to owners of devices within a limited serial number range.

Around two months later, Apple released iOS 10.2.1 and said the update resulted in an 80 percent reduction in unexpected shutdowns on iPhone 6s and a 70 percent reduction on iPhone 6 devices. However, Apple explained this was about fixing a more widely reported issue caused by uneven power delivery from older batteries, and claimed it was separate from the manufacturing fault that had caused it to recall a select number of iPhone 6s devices.

This weekend's Reddit thread – running to over 500 comments as of writing – appears to have kicked off a wave of speculation about whether the two shutdown issues are in fact related, and that Apple's fix involves dynamically throttling the phones' maximum clock speeds relative to battery output (voltage), to prevent them from drawing too much power and shutting down.

Reports that the performance of iPhone 6 series models can be improved by replacing the battery aren't entirely new, but the suggestion that Apple is intentionally throttling the performance of older devices, for whatever reason, is bound to cause controversy. We've contacted Apple for comment or clarification.

In the meantime, users interested in checking their phone's performance are also using the free CpuDasherX app to compare running clock speeds (a factory iPhone 6s comes in at 1,848MHz, for example). Let us know your findings in the comments below. Lastly, it's worth noting that DIY iPhone battery replacements or repairs performed by a third party will void any Apple warranty still covering said devices.

BootsWalking
It takes courage to save millions in service costs by denying a systemic problem, then covering up the problem by slowing down users' phones without telling them.
Score: 48 Votes (Like | Disagree)

thisisnotmyname
I'll wait for more than a couple redditers doing some pseudoscientific testing before I get outraged.
Score: 29 Votes (Like | Disagree)

xkam1x
CPU throttling is a basic function of any decent BMS. They have a throttle pin which is directly connected to CPU to reduce system load or else the BMS will have to cut all power to keep the battery voltage from dropping below critical.

If battery does drop below critical voltage, it could internally short-circuit and/or swell and cause fire.
Score: 23 Votes (Like | Disagree)

gnipgnop
Not sure I'm following this guy's logic. He owns a model of phone that has a known battery issue for a small number of units, experiences some issues, then replaces that battery and gets better performance. But his conclusion isn't that the battery was defective and fluctuating as a result of the known defect, but rather that Apple is throttling through software?
Score: 23 Votes (Like | Disagree)

I don't get why Apple would do this (nor HOW they would do it). All slowing down someone's iPhone would do is make that person get frustrated and want to get a different phone -- and possibly not an iPhone. If, on the other hand, the person simply had a much shorter battery life, at least the iPhone would still be performing properly and perhaps encourage the person to either get it repaired or upgraded.

The theory is that the unexpected shutdowns were caused (at least in part) by the cpu drawing too much power from a low battery and causing the voltage to drop to a level where it would shut down. If true, Apple could potentially "fix" the issue by throttling the cpu once the battery drains to a certain level to avoid the voltage drop.

The conspiracy theory is that Apple did this to avoid doing a massive recall. The idea is that they could have fixed this "correctly" by replacing everyone's phone (and eating the cost) but instead they secretly included cpu throttling for specific devices in the next software update hoping that no one would notice the slight change in cpu clock speed.
Score: 13 Votes (Like | Disagree)
Read All Comments