The iPhone X did make the Consumer Reports list of top 10 smartphones in the number 9 slot, but the site says it did not beat out the iPhone 8 or the iPhone 8 Plus because of its poor performance on a durability test. Both the iPhone 8 and the iPhone 8 Plus better survived a tumble test for emulating real-world drops and fumbles of about 2.5 feet that can result in device damage, despite the fact that all three devices have glass bodies.


After 50-100 tumbles, one iPhone X model suffered serious body damage, while two others had screen defects. The iPhone 8 and 8 Plus ended up with just a few scrapes after the test. Front displays for the iPhone X, 8, and 8 Plus all came away unscathed, and the iPhone X did well on scratch tests and water resistance tests. 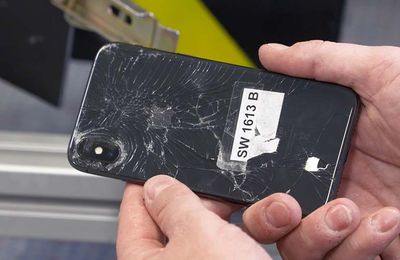 "If not for the damage in that durability test, the iPhone X would have come in ahead of the iPhone 8 and 8 Plus," says Richard Fisco, head of smartphone testing at CR.

The iPhone X didn't fare well on durability or battery tests, but it did earn the highest camera score out of all the smartphones tested by Consumer Reports. The site also listed the OLED display and the Face ID facial recognition system as iPhone X strengths.

The rear camera on the iPhone X is among the best we've ever seen. In fact, if you combine the performance scores for stills and video, this is the highest-rated smartphone camera Consumer Reports has tested.

Durability is completely subjective. That's based on how someone treats their device and what type of protection they use. Every iPhone will react differently to a drop based on angle and impact.

Nonsense. Durability can easily be tested..
Score: 50 Votes (Like | Disagree)

44267547
Durability is completely subjective. That's based on how someone treats their device and what type of protection they use. Every iPhone will react differently to a drop based on angle and impact.
Score: 31 Votes (Like | Disagree)

ticlortic
...50-100... drops?!? What are people doing with their phones? Anyone who drops the same object even 10 times probably is in dire need of medical attention....
Score: 21 Votes (Like | Disagree)

Battery life is awesome, I go to bed with >50% battery with my normal everyday usage that sinked the 6S+.
Score: 21 Votes (Like | Disagree)

Prepare for lots of butthurt posts.

Oh, people have already beat you to the punch. These same people can't stop loving on CR when they give Apple a highest award/rating in any product category. However, if Apple is criticized, even rightly, CR becomes nothing but a worthless rag (even though they still put the X in the top ten category of all smartphones). It's stunning how the comment section has devolved since I first joined MR.

Durability is completely subjective. That's based on how someone treats their device and what type of protection they use. Every iPhone will react differently to a drop based on angle and impact.

sounds like consumer reports is trying to get more views

Consumer Reports has been hating on Apple since antenna-gate. They'll always find a reason to recommend Samsung over Apple. Nothing surprising here. Funny observation - another apologist who didn't read the article didn't notice that the article didn't recommend Samsung over Apple - in fact, they even said the Samsung's glass shell broke during their tests as well. SMH.

Consumer Reports is becoming irrelevant, they needs some news today

They have been irrelevant for years.

Thursday September 29, 2022 12:38 pm PDT by Juli Clover
Tony Blevins, Apple's vice president of procurement, is set to depart the company after he made a crude comment about his profession in a recent TikTok video, reports Bloomberg. Blevins was in a video by TikTok creator Daniel Mac, who was doing a series on the jobs of people he spotted with expensive cars. After seeing Blevins in an expensive Mercedes-Benz SLR McLaren, Mac asked Blevins what ...
Read Full Article • 305 comments