Apple Says iOS 11 is Now Installed on 59% of Devices

iOS 11 is now installed on 59 percent of iOS devices, according to new statistics Apple shared this week on its App Store support page for developers.

That's up from 52 percent on November 6, indicating iOS 11 adoption has grown just 7 percentage points over the course of the last month. 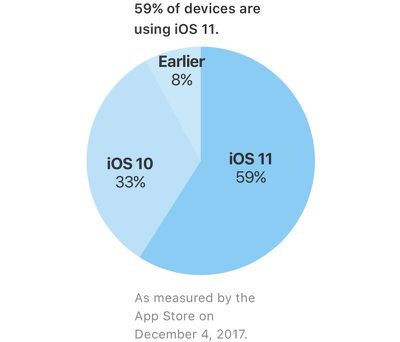 33 percent of iPhones, iPads, and iPod touch devices continues to run iOS 10, while 8 percent of devices run a version of iOS earlier than iOS 10.

iOS 11 adoption has been slower than iOS 10 adoption. Based on Apple's official App Store numbers, for example, iOS 10 was installed on 54 percent of devices in October, a month after the operating system had been released. Comparatively, iOS 11 was only at 52 percent in November, a month and a half after launch.

Apple has already released several updates for iOS 11, but that doesn't seem to have improved installation rates, especially as many of those updates have been made available to address major bugs found in the operating system.

Over the weekend, Apple released iOS 11.2, the second major update to iOS 11. iOS 11.2 introduced Apple Pay Cash in the United States, but the update was released early to fix a date bug that was causing crashes on December 2. As a result, Apple Pay Cash was not initially available and wasn't provided to customers until yesterday.

With Apple Pay Cash now available, though, customers who have been reluctant to upgrade may install the iOS 11.2 update to access the new feature, so it's possible we'll start seeing improved installation rates in Apple's next App Store support page update.

Altis
What would that number be if you could revert back, I wonder? :rolleyes:
Score: 44 Votes (Like | Disagree)

iOS 11 is now installed on 59 percent of iOS devices

This is because people cannot roll back
Score: 37 Votes (Like | Disagree)

fairuz
I installed it on my iPhone 6. I'm switching back to an old iPhone 5 now because my phone is now officially ruined, and I want the 4" screen again anyway. Found out the hard way that the lag complaints are real.
Score: 27 Votes (Like | Disagree)

WannaGoMac
Harassing and tricky nag messages got the first 59% , the rest are still dodging and weaving to avoid iOS 11
Score: 16 Votes (Like | Disagree)
Read All Comments