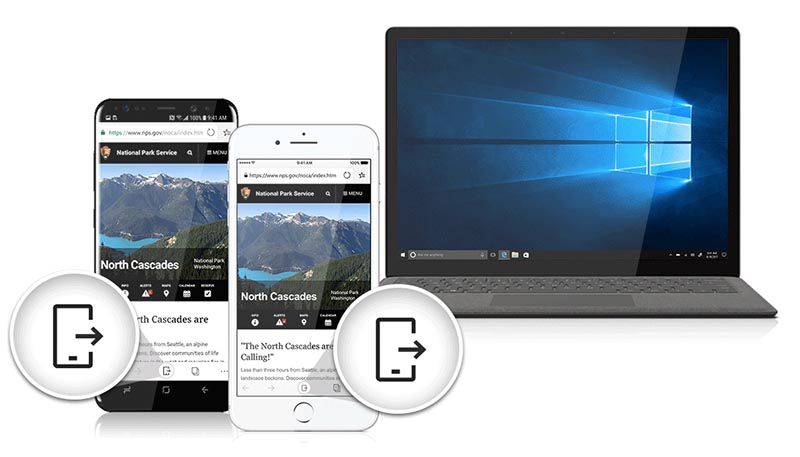 The alternative web browser will primarily appeal to iPhone users that use a Windows PC instead of a Mac thanks to a "Continue on PC" feature that can push a website from the mobile to desktop version of the browser. 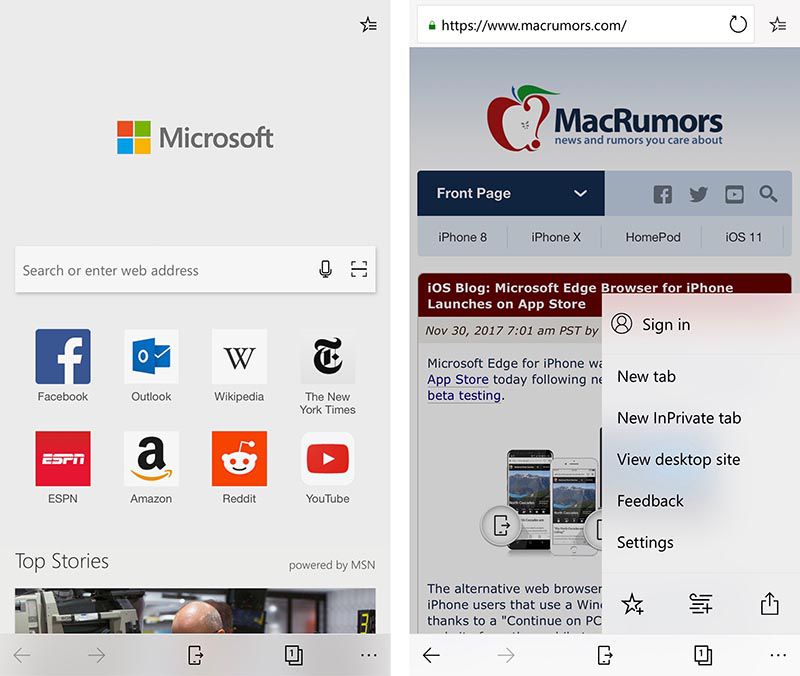 Bing, Google, or Yahoo can be set as the default search engine in Microsoft Edge for iPhone, which has a similar design as the desktop version. The mobile version doesn't have Microsoft's Cortana assistant or built-in ad blocking.

On iOS, Microsoft is using Apple's WebKit engine, as required for all third-party browsers on the platform. From a compatibility perspective, Microsoft said Edge for iOS should match the version of Safari that is currently available for iPhone.


Keep in mind that, like other third-party web browsers, Microsoft Edge cannot be enabled as the default browser on iPhone.

Microsoft Edge for iPhone is rolling out on the App Store [Direct Link] now for iOS 9 and later. It's also available for Android smartphones on Google Play. Microsoft said iPad support will be added in the future.

The browser is initially available in the United States, China, France, and the United Kingdom, with more regions and languages to follow. The app has yet to be optimized for the iPhone X's screen size.

Who is asking for this?
Rating: 28 Votes

Edge Mobile is for Windows users who use Microsoft Edge. If you are a Mac or Chrome user, this isn't for you.
Rating: 12 Votes


Rebranded Internet Explorer with the same speed. I can't wait to use this on my iPhone.


Not built for the iPhone X. Looks bad.


Not built for iPhone X almost a month after the phone was released.

No built in ad blocking.


Why did all of you even look in this thread? Clearly the walled garden Apple ecosystem works for you so anything not branded Apple is not designed for you.

For others, I think competition is great and other companies are slowly eroding the value of Apple's walled garden. I have clawed my way out of that and don't want to be in a situation where I'm solely dependent on one company for everything I do. Now that Microsoft has shed their mobile hardware platform, they are free to build a great ecosystem that is more open and lets the user chose what platform they want for phone.

The reality however is that Apple will likely continue to make it awkward for anything but what they want to lock you into. I'm starting to use Edge more in some situations. Its more efficient on Windows tablet mode and good with battery usage. And the continuity from phone to computer and back is pretty nice. I'm still not using Edge for my daily driver... was already using Firefox and their new Firefox Quantum fixed the one area that it was weak in... speed.
Rating: 8 Votes

BaccaBossMC
Rebranded Internet Explorer with the same speed. I can't wait to use this on my iPhone.
Rating: 4 Votes

Rebranded Internet Explorer with the same speed. I can't wait to use this on my iPhone.


It's actually not. Please research the application before making such a bold claim that it's just rebranded IE. I don't use Edge but this only makes us look dumb when we say things that are not accurate.
Rating: 4 Votes

maflynn
Its pretty much a useless browser in windows, so I see no reason to use it on my phone
Rating: 4 Votes


People said the same thing when IE came out and they had Netscape Navigator. Then they said it when Firefox came out. Then Chrome.
Rating: 4 Votes

ftf
It's horrendous on the desktop (at least the UI is) so I can't imagine why people would want to use this on their phone. I guess people do though so good that they have a choice.
Microsoft really goes in weird directions some times...
Rating: 3 Votes

Nick A
No built in ad-blocking? No thank you.
Rating: 3 Votes
[ Read All Comments ]