The team behind the popular Pixelmator photo editing app for iOS and Mac today launched its latest Mac app, Pixelmator Pro. Pixelmator Pro is a more advanced version of its existing Pixelmator software, built from the ground up for the Mac. 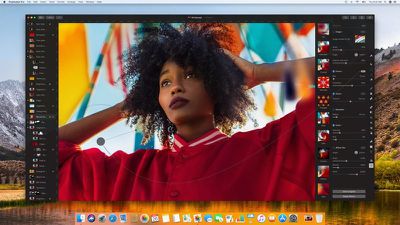 Non-destructive image editing is a key feature, and there are new tools for resizing and rearranging layers. New color adjustment tools and RAW support make it easy to quickly adjust photos, and there's an entirely new painting engine and dynamic paint blending technology powered by Metal 2, along with new brushes.


For those who are used to Pixelmator, the new Pixelmator Pro interface is quite a bit different and may take a bit of time to adjust to, but it is easier to locate tools, especially for new users.

The repair tool for editing objects out of a photo is much improved and eliminates objects much more seamlessly with just a few clicks, and tools for selectively adjusting color, brightness, sharpness, and other image aspects are more easily accessible.

Painting with the new painting tools is an entirely different experience thanks to the blending options, and there are a ton of new brushes and styles to experiment with. For photo editing, a new Recipes feature lets you build and save nondestructive effects.


It's much, much easier to work with multiple layers in the new version of Pixelmator using a new left-handed layer bar that allows layers to be quickly rearranged, resized, grouped, and more. There are also new guidelines for automatic spacing adjustments that are similar to what's available in Photoshop, and quick selection seems to be much improved.

Requires High Sierra. So that's a 'no' from me.

Sheza
Requires High Sierra. So that's a 'no' from me.
Score: 8 Votes (Like | Disagree)

GoAndrius
Hey everyone, we've just uploaded a new trial version of Pixelmator Pro, which has a fix for the crash on launch issue and it looks to be working for most people — you can grab it here: pixelmator.com/pro/free-trial/
Score: 7 Votes (Like | Disagree)

GoAndrius
I can't really give a specific timeframe, but one thing I can say is — the iPad version is up next!
Score: 3 Votes (Like | Disagree)

Isn't there a discount for people who has previous version of Pixelmator?

In case of wanting to spend 60$ on a good photo editing software, which one gives you more options, Affinity or Pixelmator Pro? And editing options?

Use the trials and see for yourself... Personally I see Pixelmator more for creating content and Affinity fo edit photos..

Both great softwares, but to me different purpose.
Score: 3 Votes (Like | Disagree)

Does anyone know if there's a student discount?

$59 is dirt cheap already for it's capabilities. But discount iTunes cards are readily available this time of year. Not hard to find them on sale for 15% off which would make it it around $50. Do a search at slickdeals.com or one of the other "bargain" discussion sites.
Score: 2 Votes (Like | Disagree)
Read All Comments