ModMy today announced it has archived its default ModMyi repository on Cydia, which is essentially an alternative App Store for downloading apps, themes, tweaks, and other files on jailbroken iPhone, iPad, and iPod touch devices. 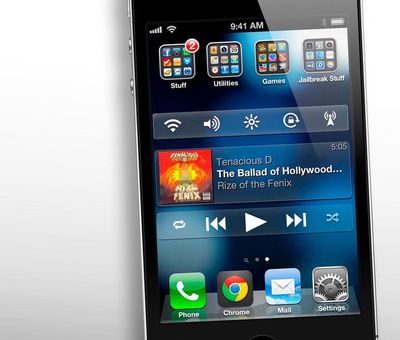 A jailbroken iPhone running iOS 6 via New Atlas
ZodTTD/MacCiti also shut down last week, meaning that two out of three of Cydia's major default repositories are no longer active as of this month. ModMy recommends developers in the jailbreaking community use the BigBoss repository, which is one of the last major Cydia sources that remains functional.

The closure of two major Cydia repositories is arguably the result of a declining interest in jailbreaking, which provides root filesystem access and allows users to modify iOS and install unapproved apps on an iPhone, iPad, or iPod touch.

When the iPhone and iPod touch were first released in 2007, jailbreaking quickly grew in popularity for both fun and practical reasons. Before the App Store, for example, it allowed users to install apps and games. Jailbreaking was even useful for something as simple as setting a wallpaper, not possible on early iOS versions.

Even in later years, jailbreaking remained popular for a number of popular tweaks that Apple has eventually implemented into iOS, such as system toggles, lock screen widgets, quick reply for text messages, screen recording, multitasking, picture-in-picture mode on iPad, and keyboard trackpad mode.

With many of those features now available out of the box, the allure of jailbreaking is considerably less for many people.

"What do you get in the end?" asked Cydia creator Jay Freeman, in an interview with Motherboard. "It used to be that you got killer features that almost were the reason you owned the phone. And now you get a small minor modification."

One downside to jailbreaking is that it has always been a violation of Apple's End User License Agreement that every iOS user agrees to. While not illegal in the United States, due to an exemption in the Digital Millenium Copyright Act, jailbreaking also technically voids your device's warranty coverage.

In a statement provided to Cult of Mac back in 2010, Apple said jailbreaking can "severely degrade the experience" of an iPhone.

Apple's goal has always been to insure that our customers have a great experience with their iPhone and we know that jailbreaking can severely degrade the experience. As we've said before, the vast majority of customers do not jailbreak their iPhones as this can violate the warranty and can cause the iPhone to become unstable and not work reliably.

Apple's cat-and-mouse game with jailbreaking has been ongoing for over a decade, and it may be finally winning the battle given advancements in iOS security and decreasing interest in jailbreaking.

iOS 11 is the first major version of Apple's mobile operating system that has not been publicly jailbroken. A few developers have claimed to exploit iOS 11 at various security conferences, but no Mac or PC tool like Pangu has been released for the public to download and jailbreak their own devices with.

The lack of a public jailbreak for the latest iOS version after several months has fueled a so-called "death spiral" for jailbreaking.

iOS users still interested in jailbreaking can visit our Jailbreaks and iOS Hacks forum section and /r/jailbreak on Reddit.

When I hug my children, enjoy a nice steak dinner, or hop on the Auto Train for an overnight journey to Washington, D.C., I'm not in the walled Apple Store.

I think those who are so entrenched in their phones that they feel they have to rebel against their overlord by jailbreaking the phone's OS should occasionally put their phones down and enjoy other things in the world. Stop and smell the roses.
Score: 84 Votes (Like | Disagree)

I'm not surprised at this point that jailbreaking is on the decline. I hardly hear anyone talk about it these days.

I've never understood the fascination with it anyway.

For example, back in the day, ATT, the only carrier of the iPhone in the US at the time, didn't allow certain traffic over 3G. To use Slingbox you needed a jailbreak.
Many other examples like tethering.
Some things you take for granted in iOS was available for years in jailbreaks.

ThunderMasterMind
Jailbreaking allows you to do whatever the heck you want with iOS. It wasn’t just apps, it was tweaks and themes to make the experience better, and oh man iOS needs it right now. iOS 11 is one of the worst iOS versions I’ve ever seen.
Score: 34 Votes (Like | Disagree)

No, "declining interest in jailbreaking" is just a consequence of missing JB, not the reason, and appl explanation is just their typical bs response

Eh, Apple added most of the most popular Jailbreaking tweaks over the years. There is far less reason to do it today compared to 5 years ago.
Score: 30 Votes (Like | Disagree)

When I hug my children, enjoy a nice steak dinner, or hop on the Auto Train for an overnight journey to Washington, D.C., I'm not in the walled Apple Store.

I think those who are so entrenched in their phones that they feel they have to rebel against their overlord by jailbreaking the phone's OS should occasionally put their phones down and enjoy other things in the world. Stop and smell the roses.

Thank those rebels.
Some of the jailbreaks are now in iOS.
Who knows if those tweaks/customization would have ever made it into iOS without JB Community.
Coincidentally, wasn't Apple once know as a rebel?

Slix
I'm not surprised at this point that jailbreaking is on the decline. I hardly hear anyone talk about it these days.

I've never understood the fascination with it anyway.

Thursday December 1, 2022 4:37 pm PST by Juli Clover
With the launch of iOS 16.1, Apple rolled out a Emergency SOS via Satellite, which is designed to allow iPhone 14 owners to contact emergency services using satellite connectivity when no cellular or WiFi connection is available. The feature was put to the test in Alaska today, when a man became stranded in a rural area. In the early hours of the morning on December 1, Alaska State Troopers ...
Read Full Article • 224 comments

Saturday December 3, 2022 10:23 am PST by Joe Rossignol
iPhone 12 Pro and Pro Max, iPhone 13 Pro and Pro Max, and iPhone 14 Pro and Pro Max models feature a LiDAR Scanner next to the rear camera that can be used to measure a person's height instantly in Apple's preinstalled Measure app. To measure a person's height, simply open the Measure app, point your iPhone at the person you want to measure, and make sure they are visible on the screen from...
Read Full Article • 111 comments