Shipping estimates for the iPhone X have improved across Europe and Asia today, with many regional online Apple stores now quoting delivery within the first eight days of December. 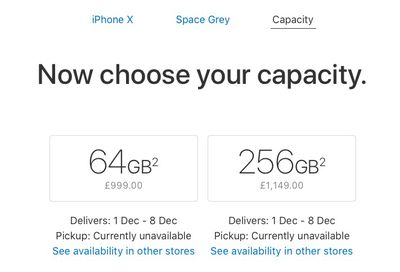 Slight variations in shipping dates can be found in other European countries such as Italy and Spain, which show estimates between December 1 and 11. Meanwhile, Denmark, Finland, Ireland, Norway, Poland, Portugal, Sweden, and Switzerland currently give a 1 to 2 week estimate.

Elsewhere, regional online stores in Asia, including China, Japan, and Singapore, quote delivery dates of between 1 and 2 weeks. The same also goes for New Zealand, while Australia now offers a more specific date range of between December 1 and 8.

U.S. shipping estimates for iPhone X improved on Wednesday to 1 to 2 weeks, but prior to today, estimates across Europe and Asia remained at 2 to 3 weeks.

Back in early November, Apple CEO Tim Cook said the company was working to ramp up iPhone X production week by week, with the aim of getting the new smartphone out to customers "as soon as possible."

Previously, rumors had suggested the device would be available in severely limited numbers until well into next year, but the balance between supply and demand already looks to be easing worldwide.

2ilent8cho
Would be amusing if the iPhone 8 started having shipping delays due to increased demand.
Score: 6 Votes (Like | Disagree)

Woyzeck
Many people - including me - are simply not willed to pay EUR 1.400 for a cellphone.
Score: 5 Votes (Like | Disagree)

I do feel a bit sorry for Apple. I am not a mindless fanboy (far from it) but it does seem to me that if they cannot meet demand they are criticised, "Isn't Cook supposed to be a supply chain guru?" etc., and when they can meet demand, many seem to conclude the product is selling poorly and hence a failure.

Fact is, this iPhone (X) is too darn expensive.
I can easily afford it but prices are just insane in *some* (erm sorry) many places around the world.
Score: 3 Votes (Like | Disagree)

slal03
So basically everyone who ordered 2 to 8 units of iPhone X in the hope of selling them all for large profits are approaching their 14 days returns period.

Having not sold them for more than the already absurd price tag they have returned these to Apple and the shipping estimates have all gone down. Looks like Ming Chi's supply constraint estimates were artificially inflated by people buying them not for themselves but to sell in the hope of making profit.
Score: 1 Votes (Like | Disagree)

…except for Hong Kong, which is still unavailable.

OMG finally someone who is saying this apart from me. I can't stress how frustrated I am due to not being able to buy the iPhone X online in Hong Kong Apple Store
Score: 1 Votes (Like | Disagree)

elmaco
No pick up yet.

Ordered mine 27 October and delivery date is still 1 December.
Score: 1 Votes (Like | Disagree)
Read All Comments