Shipping estimates for the iPhone X have improved to 1 to 2 weeks in the United States, Canada, and Puerto Rico, suggesting Apple's efforts to ramp up production have successfully resulted in greater supply. 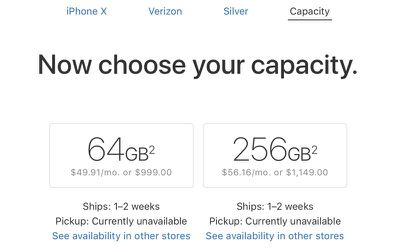 For Europe, Asia Pacific, and the Middle East, iPhone X shipping estimates are still at 2 to 3 weeks, but those estimates should also improve over the course of the next few days.

In addition to improving shipping estimates for devices purchased now from the online Apple Store, Apple has also been sending out iPhone X pre-orders more quickly than expected. Many MacRumors readers who had late November and December shipping estimates after ordering have already received their devices or are expecting them soon.

Apple retail stores are also receiving regular shipments and customers who check stock on Apple.com early in the morning and use stock-tracking tools like iStockNow have been able to make purchases with no wait time.

Back in early November, Apple CEO Tim Cook said Apple was working to ramp up iPhone X production week by week, with the aim of getting the new smartphone out to customers "as soon as possible."

Ahead of the iPhone X launch, rumors suggested the device would be heavily constrained and in short supply until well into 2018, but given the improvements we're already seeing, supply/demand balance will likely be reached earlier than originally expected.

itsmilo
from a customer point of view it would be great to see it flopping considering the price. vote with the wallet may be a great idea
Score: 35 Votes (Like | Disagree)

nfl46
MacRumors in a nutshell:

1) Shipping has improved = iPhone is a flop. Price is too high is the reason it's flopping.

2) iPhone X shipping is 3-5 months = I thought Tim Cook was supposed to be the supply chain leader; Apple should have known demand would be high.

I swear you can't please anyone around here.
Score: 29 Votes (Like | Disagree)

..or that demand is not as good as expected.
Score: 26 Votes (Like | Disagree)

User 6502
It's clear the demand is not at all high as they were expecting. People don't want to spend 1400€ for a phone (understandably). I think it's the first time ever a flagship iPhone is widely available so soon after launch…
Score: 21 Votes (Like | Disagree)

Hmmm seems like all those rumors of low supply may have been manufactured?

Or maybe demand wasn't as strong as predicted.
Score: 17 Votes (Like | Disagree)
Read All Comments