A new study suggests the iPhone X recorded a higher adoption rate than the iPhone 8 and iPhone 8 Plus over each device's first three days of availability. 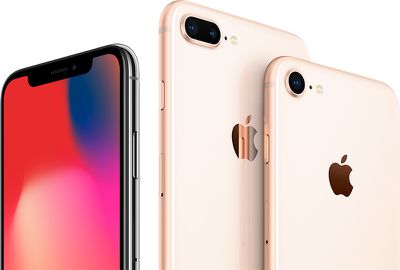 After the first weekend of sales, the device is estimated to have captured nearly one percent market share among all iPhone models, the highest over that time since the iPhone 5s, according to mobile engagement platform Localytics.

By comparison, Localytics measured iPhone 8 and iPhone 8 Plus adoption of 0.3 percent and 0.4 percent respectively among all iPhone models after the first weekend of sales for those devices back in September.

The data suggests that many customers may have been waiting for the iPhone X instead of purchasing an iPhone 8 or iPhone 8 Plus.

It's important to note that the data does not represent actual sales of the iPhone X, but rather measures users who have received the devices and started using one of the 37,000 apps integrated with the Localytics SDK.

It's also important to consider that there are significantly more iPhones in the market today than in previous years, so each new iPhone has a tougher challenge of gaining market share among all of the models before it.

Even if the adoption data from Localytics doesn't precisely line up with Apple's internal sales figures, the company's revenue guidance of between $84 billion and $87 billion in the current quarter does imply significant iPhone X sales, so there's a good chance the device is outpacing the iPhone 8 series.

Apple stopped releasing first weekend iPhone sales figures starting with the iPhone 7 and iPhone 7 Plus, as demand typically outweighs supply, so the company feels it is no longer a representative metric for investors or customers.

In years past, we've announced how many new iPhones had been sold as of the first weekend following launch. But as we have expanded our distribution through carriers and resellers to hundreds of thousands of locations around the world, we are now at a point where we know before taking the first customer pre-order that we will sell out of iPhone 7.

These initial sales will be governed by supply, not demand, and we have decided that it is no longer a representative metric for our investors and customers. Therefore we won’t be releasing a first-weekend number any longer.

Apple has also never released iPhone sales figures on a model-by-model basis, but chief executive Tim Cook did reveal the iPhone 8 and iPhone 8 Plus were its best-selling models between their September release and iPhone X launch day.

iPhone X orders placed today ship in an estimated 3-4 weeks around the world, and the device also has limited in-store availability.

In other news, water is wet.

Well, here is the thing, water isn't wet. The definition of wet is being soaked in a liquid. Water is water, when water touches something that is not water, the thing that the water touches becomes wet. So keep your fake news buddy.
Score: 14 Votes (Like | Disagree)

busyscott
Well what did you expect after all the hype? The real question is what kind of cut is Ming-Chi Kuo getting? There's no way that guys not on Apple payroll.
Score: 12 Votes (Like | Disagree)

felixroqu3
In other news, water is wet.
Score: 9 Votes (Like | Disagree)

Well who wants an 8 with its 3 year recycled design...

I do, I think the 8 with the glass back is a much better design.
Score: 8 Votes (Like | Disagree)

yaxomoxay
And well deserved. I rarely buy on day one (actually never), and I never really praise products, but this thing is just incredible.
Score: 8 Votes (Like | Disagree)
Read All Comments