It took somewhere around 15 minutes for the iPhone X to begin selling out this morning after pre-orders went live at 12:01 a.m. Pacific Time, and for some models, that timeline was much shorter.

Delivery estimates started slipping to one to two weeks within minutes, and by the time 1:00 a.m. rolled around, Apple was listing 5 to 6 week estimates for all models across all carriers in the United States. Orders placed now will not arrive until December.

Unsurprisingly, hundreds of iPhone X models that were purchased via pre-order this morning are flooding Craigslist and eBay at huge markups. 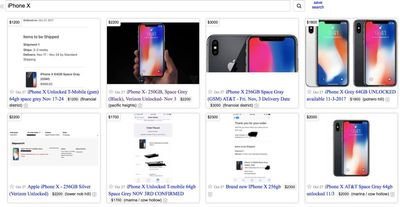 On Craigslist, in the San Francisco Bay Area, for example, people are charging $2000 for a 256GB iPhone X on average, a markup of almost $1,000. Similar high prices are listed for all models and capacities. It's the same story on eBay.

Thousands of iPhone X models are listed, many that already have tons of bids. An auction ending in an hour for a 256GB iPhone X has a current bid of $1,675, for example, a premium of $500.

With supplies so constrained, it's no surprise to see hundreds of people who are hoping to make a few bucks from Apple customers who don't want to wait months to get their hands on a new device, but it's frustrating. Apple limits iPhone X purchases to two per customer, but with some people willing to pay hundreds extra, that limit doesn't put a stop to the scalping practice.

Customers who have not already pre-ordered are looking at weeks of waiting, but Apple does plan to have iPhone X models available for purchase in store on launch day, so for those who don't mind going early and waiting in line, there's still a chance to get a device on November 3 without paying extra to a scalper.

Apple said in a statement this morning that demand for the iPhone X is "off the charts." "We're working hard to get this revolutionary new product into the hands of every customer who wants one, as quickly as possible," the company added.

gsmornot
You have to be in a bad way to pay even more for the phone than the original asking price.
Score: 67 Votes (Like | Disagree)

littleredwagen
I'm not sure what is worse 1) the scumbags do this 2) people actually pay those prices
Score: 30 Votes (Like | Disagree)

840quadra
I understand freedom of this economy, but quite honestly people that do this make me sick. There are plenty of people who want these devices, and it also sucks that people will be willing to pay those prices.

But, that is my use case, and I am only in control of my own actions and conscience .

It also bothers me that some of my favorite tech podcasters are actually participating in this type of activity too.
Score: 22 Votes (Like | Disagree)

Alphazoid
Meh i dont see the fuss. Not everyone has the chance to stay up late or worse stand in a long queue in cold weather. If you have disposable money then feel free to pay for the convenience. I don't agree with scalping per say but i'm not gonna hate on their hustle. Either way Apple is getting paid. Maybe it affects some genuine customers but eventually Apple will have units for them. ¯\_(ツ)_/¯
Score: 22 Votes (Like | Disagree)

haunebu
People will pay money for convenience. News at 11.
Score: 20 Votes (Like | Disagree)

Meh i dont see the fuss. Not everyone has the chance to stay up late or worse stand in a long queue in cold weather. If you have disposable money then feel free to pay for the convenience. I don't agree with scalping per say but i'm not gonna hate on their hustle. Either way Apple is getting paid. Maybe it affects some genuine customers but eventually Apple will have units for them. ¯\_(ツ)_/¯

Free market, baby. I don't get why scalpers get such a bad name. If it was such a concern to Apple, they would (and could) fix the issues, but all this buzz helps them.
Score: 19 Votes (Like | Disagree)
Read All Comments