Debit and credit cards from participating banks can now be added to the Wallet app in each country and can be used to make purchases wherever NFC-based contactless payments are accepted. Apple Pay also works within apps and on the web in countries where Apple Pay is available. 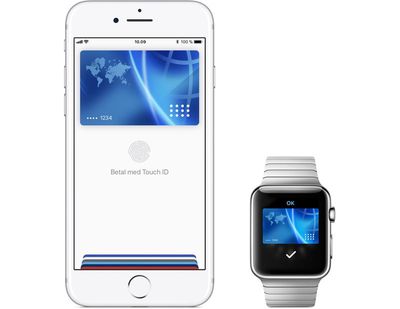 In Denmark, Jyske Bank (Visa debit cards only) and Nordea are supporting Apple Pay. In Finland and Sweden, Apple Pay can be used with debit and credit cards from Nordea and ST1. Edenred and N26 support will be coming soon to Finland, while Ticket Rikskuponger will support Apple Pay in Sweden in the near future.

In United Arab Emirates, the following banks and cards work with Apple Pay:

Following the launch of Apple Pay in Finland, Sweden, Denmark, and UAE, Apple Pay is available in 20 markets. Apple Pay may also soon launch in the Netherlands, Poland, Norway, and Germany, based on rumors or hints of the feature that have been spotted on Apple's site, but Apple has not yet confirmed Apple Pay is coming to those countries, nor provided details on when.

CB1234
I am in Dubai, UAE and can confirm I added my cards to Apple Pay and used it this morning to buy a coffee ( I didn't really need it, simply wanted to try Apple Pay). The look on the cashier's face was priceless !!!
Score: 14 Votes (Like | Disagree)

Tinototem
Love it! been waiting for Apple pay in Sweden for a long while.
My visa card and master card are both NFC enabled so i have been able to pay by tapping the card on the card reader. But its nice to know that i can now use my mobile instead and do not have to bring up my wallet.

One of the great benefits we will get with this apple pay release is that a lot more customers will ask for nfc support and that will benefit us all. At the moment it is a bit rare for NFC support.
Score: 5 Votes (Like | Disagree)

Otaviano
Apple Pay comes to Sweden and my bank does not support it. :(
Score: 4 Votes (Like | Disagree)

If i was the CEO of Apple i would remove all Australian banking Apps from the app store until they agree to support Apple Pay, i'm soo over not being able to pay with my phone because of their bureaucratic system.

Because of Westpac's pathetic stance on Apple Pay, I've moved over to ING and am going to close my account with Westpac.
Score: 4 Votes (Like | Disagree)

Swish requires that terrible BankID app which is very slow compared to Apple Pay. And in new stores you first have to scan a code or type in a phone number instead of just holding the phone onto a terminal. Apple Pay would just be much faster if Sweden wouldn't lack NFC terminals so badly.

Between friends, Apple Pay can be used in iMessages. Also much more convenient than Swish + BankID but I understand that it is very difficult to make people change their habits.

At least in Stockholm, nearly everybody has an iPhone. I rarely see any other phones here. Still, I give Swish the credit of being multi platform. That definitely has advantages.

I will test Apple Pay on my way home but yes, I doubt it will be nowhere as slow or complicated as Swish.
I know well that awkward 5-10 second feeling when paying at a store with swish. Type or scan the number, amount, phone switches to BankID, scans your thumb, phone switches back to Swish, complete. It doesn’t sound like a lot, but it is if you have a stranger on the other side staring at you, waiting. lol
Score: 4 Votes (Like | Disagree)
Read All Comments