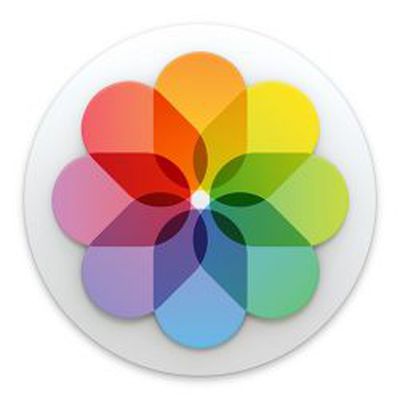 Apple's native Photos application got an update with the release of macOS High Sierra, including new library browsing features, a reorganized editing window, enhanced image recognition, and some additional tools to help make your photos look even better. Keep reading to find out what's new in the Photos app.

Apple has tweaked the main Library interface in Photos. Whereas previous versions of Photos let you use tabs along the top of the screen in place of an optional sidebar, Apple has now fully embraced the latter as the main navigation area, and has also added a draggable selection counter to the browser that you use to move or export batches of photos.

The new sidebar is divided into five sections: Library, Devices, Shared, Albums, and Projects. The Library section is where you can select from different browsing options, including Memories, Favorites, People, Places, and a useful new option called Imports, which organizes your photos based on when they were imported into your library.

The Shared section contains links to any shared albums you've created, while likes and comments appear in the Activity feed. The Albums section meanwhile contains two collapsible sub-sections called Media Types and My Albums. Media Types contains auto-generated views of your photos filtered by Selfies, Panoramas, Live Photos, and the like, while My Albums contains all the albums you have manually created. Lastly, Projects is where any books, cards, calendars, prints, or slideshows you're working on appear.

The Photos app also got a reorganized editing window in High Sierra. In addition to the sidebar, there's now a toolbar along the top of the screen with three tabs that let you toggle through three different editing sidebars, making for a less cluttered interface all around. Notice too that the One-click Enhance option is now an icon at the top right of the screen, next to the Done button.

The Crop tab corrals the traditional crop functions in the sidebar, while the Filters tab is home to an enhanced selection of image filter presets, each with three variations to choose from – Vivid, Dramatic, and Black and White.

Selecting the Adjust tab switches the sidebar to all the usual advanced editing tools, including two new ones, Curves and Selective Color. The triangle beside each tool allows you to expand it for more options, or collapse it to make room for others.

Apple has introduced additional tools for editing Live Photos, including the ability to manually select the static image that represents the clip. This is achieved by adjusting the slider at the bottom of the editing window and selecting Make Key Photo.

You can also now trim Live Photos, and even apply effects such as a Boomerang-like back-and-forth effect and an ethereal Long Exposure style, similar to when a shutter has been left open for a long time. The icons at the bottom left of the editing window let you mute the clip or turn off Live Photo entirely.

Lastly, Apple has enhanced the integration of its native Photos app with third-party apps, which should come as good news to those looking to broaden their editing options.

A number of popular third-party apps have already announced their support for Apple Photos, including Pixelmator Pro, Aurora HDR, Luminar, and Creative Kit. Several photo printers have also signed up, including Whitewall and Shutterfly. You can find more apps that support Photos by checking out the new dedicated section in the Mac App Store, which can also be accessed from within the Photos app.

Can I rotate videos yet?

Wish there was a message popping up whenever someone tries to shoot video in portrait mode. Or even better an electric shock. Just a mild reminder to turn the phone. :)
Score: 5 Votes (Like | Disagree)

cgriffis753
You forgot syncing of people album across iCloud
Score: 4 Votes (Like | Disagree)

paul987
I'm actually still using iPhoto because I never liked that Photos dropped iPhoto's "Events" functionality. I like categorizing my photos into discrete containers, and the Albums functionality of Photos is just not the same because a photo can be in multiple Albums or in no albums at all. With iPhoto you know that every photo is in one and only one Event. If anyone has come up with a way to replicate similar functionality with Photos please let me know.
Score: 3 Votes (Like | Disagree)

robertcoogan
I like the interface a lot, it is much better organized. But I still really, really, really miss the events view. Wish Apple hadn’t gotten rid of it.
Score: 3 Votes (Like | Disagree)

ep2002
paul987 I just wrote to say that I’m also in agreement with you. I felt “forced” to update from Aperture and iPhoto to take advantage of the new features of Photos app. It did transfer all my events into “albums” in my Events folder, but I do missing the simplicity of importing and automatically generating new events by date. This is. It a “clunky” manual process.

Any advise for organizing is appreciated

I'm actually still using iPhoto because I never liked that Photos dropped iPhoto's "Events" functionality. I like categorizing my photos into discrete containers, and the Albums functionality of Photos is just not the same because a photo can be in multiple Albums or in no albums at all. If anyone has come up with a way to replicate similar functionality with Photos please let me know.

displaced
Can I rotate videos yet?

I've only been asking for a decade...
Score: 2 Votes (Like | Disagree)
Read All Comments