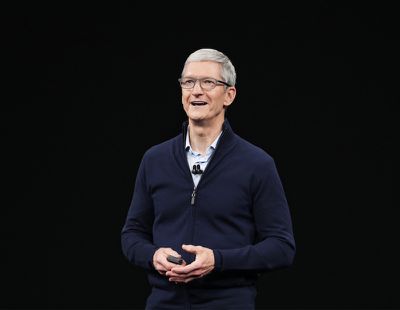 He added that "we all started somewhere" and "we are all descendants of immigrants."


DACA, which the Trump administration moved to end earlier this month, allowed many illegal immigrants who entered the United States at age 16 or under to receive a renewable two-year period of deferred action from deportation, and eligibility for a work permit in the country.

Trump gave U.S. Congress a six-month window to try to "fix" and legalize the Obama-era policy before phasing it out. Nearly 800,000 undocumented individuals belong to the program, including over 250 Apple employees.

In a letter to employees, Cook said Apple will advocate for a legislative solution that provides permanent protections for all "dreamers" in the United States. He also said Apple would "provide them and their families the support they need, including the advice of immigration experts."

Cook added that "all companies should have values," since they are nothing more than "a collection of people."

As for education, Cook said Apple has been pushing for students to learn coding at all levels, ranging from K-12 schools to community colleges:

We started many years ago crafting a language that would be as easy to learn as Apple products are to use. We then designed a curriculum. We found an incredible number of K-12 institutions wanting and pulling the curriculum. We then took that to community colleges. […] These are huge systems with hundreds of thousands of people in them. I’m seeing an incredible desire to bring coding to the masses.

We're actually training teachers right now, and through every classroom we've been in, we’ve found willing teachers, administrators, and the kids are more engaged than ever before. Kids want to learn about the digital economy—they're growing up digital. It's not good for them to grow up digital, and then go to school in an analog world.

Apple's App Development with Swift is being offered at more than 30 community college systems across the United States this school year.

TonyC28
Cook said "dreamers," or individuals who were brought to the United States at a young age when their parents or guardians illegally immigrated to the country,"...

Credit to MacRumors for using the word “illegally.” It’s an important distinction and I’m honestly surprised the word was used.
Score: 44 Votes (Like | Disagree)

Someone should tell the Righties stop blaming brown people for all your problems. It's the wealthy that are taking advantage of the system and keep doing so when you elected an elitist into government.

Rogifan
How do we know all dreamers deeply love this country?
Score: 25 Votes (Like | Disagree)

the8thark
This is exactly why I hate Tim Cook. He hijacks events and communications to his own employees to push his own personal political agendas.

I'm not against Tim Cook having these agendas, just he needs to stop pushing them on Apple time. Do it on his own time. Tim Cook is paid to be Apple CEO, not political lobbyist.
Score: 23 Votes (Like | Disagree)

WatchFromAfar
You know the thing about Tim Cook that people find egregious. He is a man selling us phones and computers. Now would you listen to the man who sold you a washing machine talk about politics? Tim seems to think he has the right to mouth off because he believes his products are magical and so are his utterings. Either get into politics or shut up.
Score: 20 Votes (Like | Disagree)

Ds6778
I am perfectly ok with legal immigration.
Score: 19 Votes (Like | Disagree)
Read All Comments